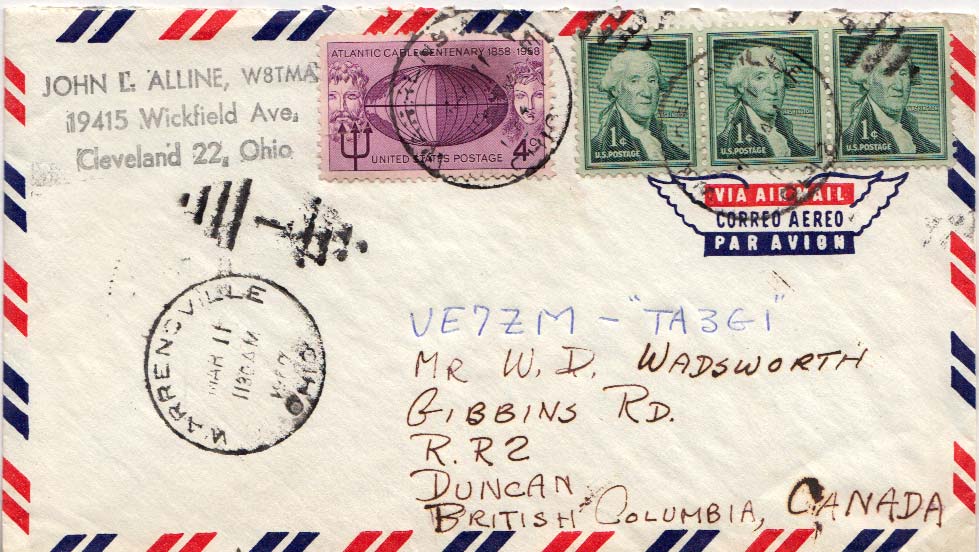 On March 11, about 1960, Mr John L Alline of 19415 Wickfield Road, Warrensville Heights, Ohio, sent a letter to Mr W D Wadsworth, of Gibbins Road, Duncan, British Columbia. Who were these men, and what was the correspondence about?

John Lowell Alline was born December 4, 1922, in Cleveland, Ohio, the son of John Lowell Alline and Emilie Maue. His father was born in Le Mars, Iowa; his great-grandfather Alfred Alline had moved to Le Mars from Addison, Maine, in the mid 1800's.

John's mother, Emilie Maue, was born about 1892 in Pennsylvania, most likely in Hazelton, Luzerne County, where her father Philip is found on censuses from 1850 (with his father Adam) through 1880. Emilie's mother, Mary Nusbaum, was born in Germany, and Emilie's paternal grandparents were born there as well.

You can find extensive information on the genealogy of the Alline family at Alfred A Alline.

For the Moue ancestry see: Philip Maue. If you start looking for them on the search page at familysearch.org, note that their surname was usually indexed incorrectly, as Mane, Maney, Mowey, etc.

I have posted the research that I did on the Wadsworth family here.

Reason for the Correspondence

While it is possible that these men were old friends exchanging pleasantries, the reason for the letter more likely has to do with the groups of letters and numbers included in the address and return address.

Both John Alline and William Wadsworth were ham radio operators and the letters and numbers were their on air callsigns to identify their station. I found Mr Alline in the Radio Amateur Callbook Magazine as early as 1940, when he would have been 18 or so. Mr Wadsworth showed up a few years earlier, in 1937.

In this case, John was probably asking Mr Wadsworth for a QSL Card to confirm a contact he had made on one of the amateur radio frequencies.

The extra call sign on the address caught my eye, so I did a little more research. The March 1960 issue of DXer Magazine, published by the Northern California DX Club said that Bill Wadsworth, VE7ZM, was the QSL manager for the station TA3GI in 1960. That meant that he handled any request for confirmation of contacts made with that station.

Further Googling brought me to a few accounts of the operation of the station itself. The October/November 2004 of The Nugget, The Newsletter of the Mother Lode DX/Contest Club, carried the reminiscences of Shirley L. Rose (AA6K). He said that he was in the US Air Force and stationed in Turkey from October 1959 to October 1962. He relates: 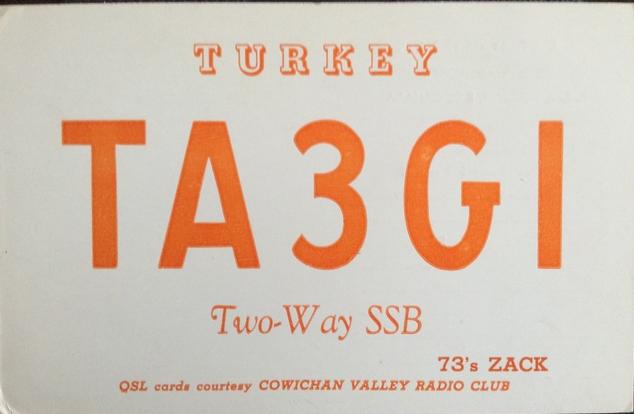 In those days the government of Turkey forbid Ham Radio within their country. However when you have some bored personnel who are isolated with time on their hands then they’ll find something to do. Myself and two other troops set up a station using some “auxiliary” HF equipment we had in supply (Collins KWS-1 transmitter, Collins 75A-4 Receiver, And a Mosley trapped vertical antenna) and went on the 20 meter band as TA3GI. TA being Turkey, three being the number of participants, and GI referring to government issued equipment. We had a great time for about three months and then the Turks began snooping around with their DF (direction finding) equipment so we ceased our operation.

A similar story was told by Alfred J. Cammarata, who was stationed in Turkey from April 1960 to October 1961:

Amateur radio operation was banned in Turkey. During slow periods at work I sometimes tuned a spare receiver to the ham bands and listened to the activity. The temptation was strong to operate illegally or “bootleg” but better judgement prevailed. However, one day the propagation was so good - the USA was coming in strong - that temptation overtook me and I tuned our transmitter to the 20 meter amateur band and in about a half hour caused a ruckus using the call sign TA3GI working several stations using morse code. No harm done. So I thought. A month later at the close of a monthly commanders call meeting, as an afterthought, Capt. Speelman mentioned he’d received a memo from Turkish authorities reminding U.S. personnel that amateur radio operation was illegal. My heart dropped into my stomach. I’d been forewarned.

DXer Magazine, mentioned above, also carried a brief note saying that TA3GI was operating undercover, and QSL requests should be sent to VE7ZM.

Incidentally, those first hand accounts narrow down the likely postmark date of the letter we started with to the spring of 1960. That would be when John Alline was skillful enough and fortunate enough to communicate with the US servicemen's station, TA3GI, in Turkey.

An Explanation of the QSL Card 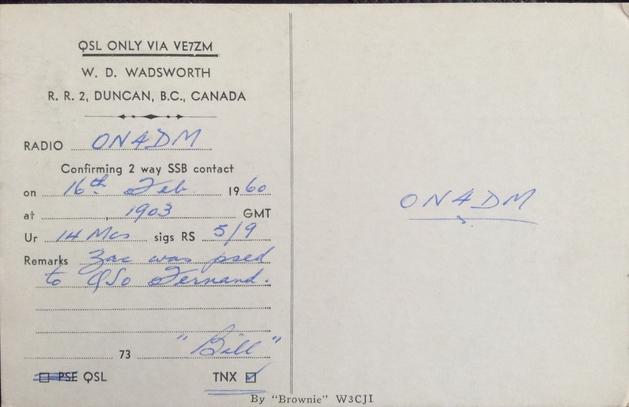 To clarify, the QSL card pictured in this article is not the one that was sent to John Alline, in Warrensville Heights, Ohio. The back of the card indicates that it went to a man named Fernand, who operated a station with the call sign ON4DM. This would make it a Belgian station.

The front of the card is easy enough to read. It says basically that a station in Turkey, TA3GI, engaged in a two way communication in the single side-band mode (not AM or FM, for example.) The operator, Zack, sent his best wishes, or 73's. And the card was paid for by a Radio Club in British Columbia, where William Wadsworth lived.

The back of the card is a little more cryptic for the non-amateur. The top section reminds the recipient to address all correspondence regarding this station to Mr Wadsworth since, as we learned, he was the station's QSL manager. It then confirms the conversation with station ON4DM, giving its date and time: February 16, 1960, at 1903 GMT or standard time in Greenwich, England. "Bill" says that Zack was pleased to talk to Fernand, the operator, and thanks him for the contact.

It's not often that I get to combine four past and present hobbies at once: stamp collecting, blogging, genealogy, and ham radio, but this envelope got my attention for that reason. Plus I lived not far from Mr Alline while growing up, so it was a touch of home to work with a postmark from the Cleveland area.