In 1941, Mrs. Felix Tarsney of 63 Willow Street, Glen Ridge, New Jersey, received a letter from Gaillimh (Galway City), County Galway, Ireland.1 What can we learn about Mrs Tarsney? Was she from Galway?

Compared to some other postal covers I have looked at, this family was relatively easy and well documented. There were also a few family trees at MyHeritage.com, and I think at ancestry.com as well. So I will just summarize what I found and maybe include a few things I didn't see on the trees at MyHeritage.

On September 17, 1911, Barbara Tarsney and her sister Delia "Bridget" Devestern arrived on the SS Lusitania. Barbara was headed to 40 Newell St. Their last place of residence had been Moycullen, Ireland.4

There is a record of a marriage of Felix Tarsney to Barbara Hynes in Brooklyn, NY, on June 28 1908.5 Various trees on line had identfied Moycullen as Barbara (Hynes) Tarsney's place of birth. So it was no surprise to find that the Residents of house 31 in Ower (Wormhole, Galway) on the 1901 Census of Ireland included a Barbara and Bridget Hynes, with their parents Lawrence and Mary, and a number of siblings.6

What I didn't find on any of the family trees was the arrival of Barbara Hynes in 1905, the year in which she usually said she had immigrated. This was probably because the indexes at familysearch.org, libertyfoundation.org, and elsewhere, had the right ship but the wrong date. By starting at stevemorse.org and searching for the ship I found that Barbara had indeed arrived on the SS Oceanic, but on April 6, 1905, not April 5. She was age 20, a housemaid from Galway, and was headed to her uncle Frank Hynes' home at 179 Java St, Greenpoint, Brooklyn, NY. She said she had been in the US before, in 1899. I didn't find that voyage.7 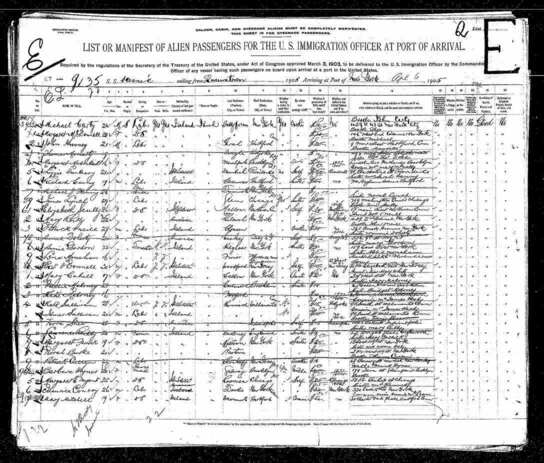 So yes, Barbara (Hynes) Tarsney, the addressee of the envelope, was from Galway.

A tree at ancestry.com,10 said that Felix' father James, who died in Brooklyn in 1911, had been born in County Armagh on 22 Nov 1854 to Arthur McAtarsney. There was an Arthur McAtarsney on Griffith's Valuation of Armagh the in parish of Loughgall and the townland of Annaghmore. 11 And in 1901 there was a Felix McAtarsney, 54, in Annaboe, Kilmore, Armagh, who looks like a relative. Annaboe is an 11 minute drive from Annaghmore.12 So evidently, Felix' family was originally from Armagh. Then his father James left home to find work, went to Louth for a while, then to Monaghan, before emigrating to Brooklyn.

There is more information about the Hines and Tarsneys in the Other Families section of this site.

^1. The image of the envelope to Mrs. Felix Tarsney is from the Jim Forte Postal History site and can be found on this page of the site, unless it has been sold. I am not connected with the site.

Most of the information here is about my family or my wife’s, or about families with ties to Cleveland, Ohio, or the area near Rostrevor and Kilkeel in County Down, Ireland. There are also some unrelated families included that I came across. Whatever the case, I hope the material is helpful in your own research.

I use one cookie on the site so I know what general part of the world my visitors are coming from. It does not tell me anything about them as individuals.
-- Ed Hamilton