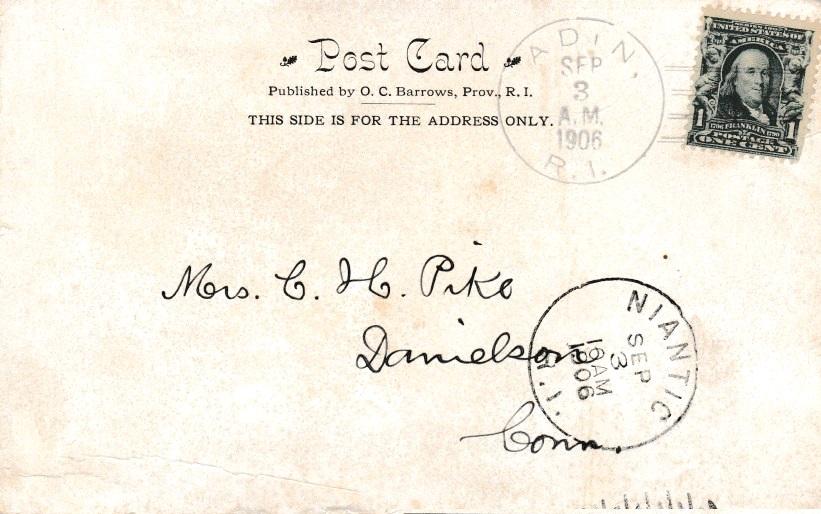 Sept 2/06
We leave here on Tuesday at 9:50 for a week to Niagara Falls and Dayton, Ohio.Come and see us when we get home. Love to Uncle Glenn. Children all well.
O. C. Barrows

What can we learn about these two people?

As it turned out, they were brother and sister. Charissa (Barrows) Pike was born June 1, 1849, in Providence, Rhode Island, the daughter of Fayette Barrows and Sarah H Reynolds. She married Dr George A Pike on September 9, 1874, in Providence, while a resident of Scituate, Rhode Island. On the 1880 Census the Pikes were in Bristol, Rhode Island. Dr Pike died there in 1892 and is buried in Bristol North Burial Ground. The Pikes had no children.

Charissa had trained as a nurse, and lists that as her profession on the 1900 Census of Danielson, Connecticut, where she is living with her uncle, Glenn Reynolds. She remained in the area until her death July 10, 1936, in Killingly. She is buried in Swan Point Cemetery, Providence, as are her parents. 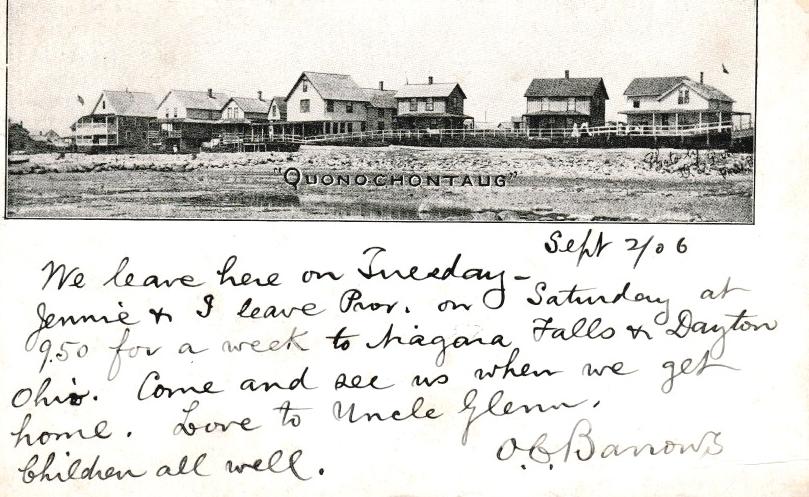 Charissa's brother Ozro was born October 4, 1846, in Johnston, Rhode Island. He had four or five children by his first wife Helen Alverson, who died in August 1886. About July 5, 1888, Ozro married Jennie Augusta Eddy, in Providence. Their three children are probably the ones referred to on the postcard. Ozro Barrows died June 10, 1928, in Providence and is buried in Bristol North Burial Ground. His wife Jennie died in Granville, Ohio, in 1946.

If you look back up at the address side of the postcard you will see at the top "Published by O.C. Barrows, Prov. R.I." I've researched a lot of postcards, but this is the first one I have seen signed by the publisher! 🙂 I didn't find any reference to Ozro Barrows, publisher, on the censuses, but Google Books had a copy of Volume 1 of "Missions: A Baptist Monthly Magazine" which said that O.C. Barrows, of 107 Sorrento Street, Providence, was the man to talk to if you wanted a subscription to the magazine. In the 1907 Providence City Directory he is listed at 107 Sorrento as a bookkeeper.

The Barrows and the Reynolds families

Usually when I research a person on a postcard I include a sketch of their ancestry, but these families are well covered. You can start at familysearch, Charissa H Barrows, or at ancestry, Clarissa Huntington Barrows. My brief outline of the family is here: The Barrows Family.

By the way, the lady's name was Charissa, like her grandmother, not Clarissa.