Evaline B Jeralds of Yalesville, Connecticut 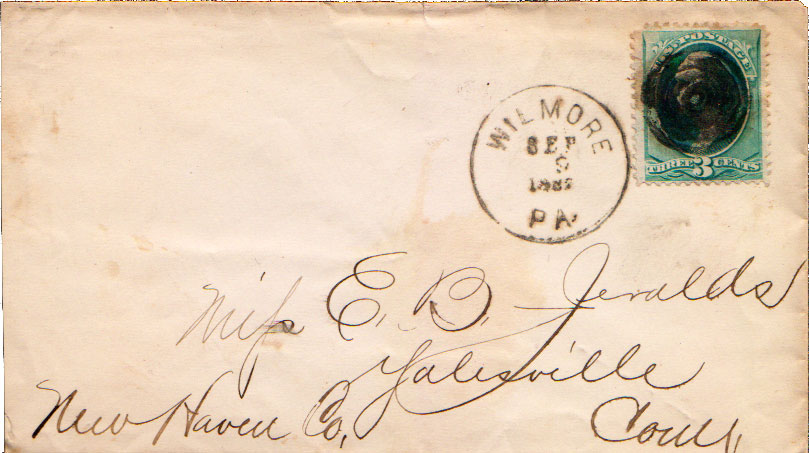 In September 1882, Miss E B Jeralds of Yalesville, Connecticut, received a letter from someone in Wilmore, Pennsylvania. What can we find out about Miss Jeralds and her correspondent in Wilmore?

This postal cover interested me because my grandfather was born in Wilmore, his grandfather having settled there about 1850. Unfortunately, that wasn't much help with identifying the sender, as we shall see.

I am pretty sure that the recipient of the letter was Eva Jeralds, who in 1880 at the age of 17, was living in Yalesville, a section of Wallingford, Connecticut, with her parents Isaac and Ellen. She is listed as "Evaline B" on later censuses. Her uncle Bennett Jeralds was part owner of a company in Yalesville that manufactured Britannia spoons, and her father Isaac evidently worked for the company. He was listed as "spoon maker" in contrast to Bennett's "spoon manufacturer" on the censuses, but had real estate worth a few thousand dollars, so I don't think he was a common laborer in the factory.

From various biographical histories I learned that Isaac's father was Ransom Jeralds, possibly a native of Cheshire, Connecticut, who moved to and died in Wallingford. Ransom's father was "a seafaring man [who] lost his life on the water." No one seemed to know that man's name or origin.

Evaline Jeralds never married. From 1900 to at least 1940 she lived in Bethlehem, Connecticut, on her cousin Dwight Baldwin's farm. In the same household were her sister Edith and later her brother Frank. Evaline died April 1, 1943, in Bethlehem.

Who sent the letter?

Basically, I haven't a clue. I looked at two people in Cambria County who were born in Connecticut, but I didn't find a connection between either one and Eva Jeralds. The first was Lizzie (Rist) Friedhoff, who lived in Ebensburg, but the Rists were from New Haven city, not Wallingford. The second was Bridget (Kelly) Watts, born in Connecticut to an Irish mother. She lived in Gallitzin, but I found no trace of her at all in Connecticut.

I would say Lizzie Rist was the more likely of the two, since Ebensburg is closer to Wilmore than Gallitzin is. But the sender of the letter could just as easily be someone else completely.

Well, I was halfway successful with this postal cover—at least I found the recipient. And I enjoyed working on a letter that was postmarked in Wilmore. My great grandmother's brother Morris Kiel was postmaster of Wilmore from April 2, 1861, to September 26, 1864. He was succceeded by my great great grandfather, James Hamilton. But by 1882, when the letter to Evaline Jeralds was mailed, the Hamiltons and Kiels had cleared out, so they didn't postmark it. I don't know who did.