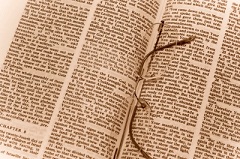 I had the opportunity to look at two old Bibles which apparently once belonged to members of the Hellier family of Bangor, Maine. They are in a private collection and are not for sale. I am presenting the family record information here for the benefit of anyone concerned.

The first Bible was published in 1847. Its inscription says "Saml S. Hellier Bangor Me USA." There is also the inscription "Mrs & Mr Jewell Lincoln, Me." On a separate page is this note: "Samuel Lowder Hellier was born in Bangor Maine Dec 30th 1832. Died in Bangor Oct 18 1852. The spring before his death he was mate of a vessel sailing to Liverpool. While in England he visited his Grandmother Hellier in Devonshire Co."

Samuel was the son of John and Eliza Hellier. In 1850 Samuel Hellier, age 17, was working as a mariner and living with his parents John and Eliza in Bangor. John had been born in England. A biography of Samuel's nephew Charles Edward also mentions a Devonshire family origin.

Blanche L. Hellier was the daughter of Samuel's brother Walter and his wife Eunice.  Blanche, age 7, was living with them in Bangor in 1880. She died in 1942 and is buried with her parents in Mt. Hope Cemetery.