While I was going back through the information on my mother's side of the family, I solved one mystery: what ever happened to Catherine Rodgers' first husband, James McAneny? She remarried shortly after their last child was born, but I was never able to find James' death record. Why? Because I was looking in Cleveland and he died in Chicago.

Here is an image that was once at Familysearch.org: 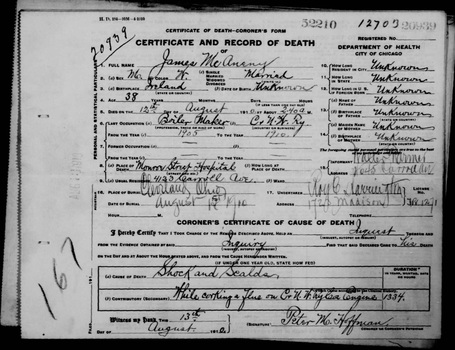 So Catherine was a month or so pregnant with James' last child, Lillian, who was born in April 1911. Here is an summary of the information on his death record:

Edited to add: A descendant of Lilian McAneny has confirmed that James died in Chicago. He remembers seeing the telegram that his grandmother Catherine received informing her of the news.