This website includes a picture of the 1922 second grade class at Holy Name Parish on Broadway on the southeast side of Cleveland. My mother was in that class and identified most of the children in the picture. She identified the fifth young lady from our left in the back row as Catherine Elwell. There was a Kathryn Elwell living in the area, described below, who is probably her.

Kathryn Elwell was born August 15, 1913, in Cleveland, Ohio, the only known daughter of William Clarence Elwell and Mary Egan. In 1920, the family was living at 8004 Force Avenue, on the southeast side of Cleveland. In the household were Kathryn, her parents, her older brothers Eugene and George, and her younger brother Robert. Kathryn's father was working as a foreman for a hoist company. 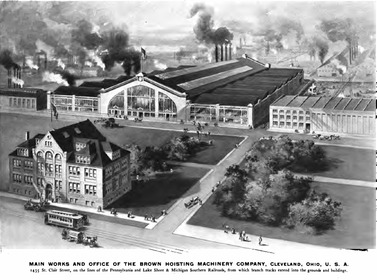 The family was still on Force Avenue in 1930, but by 1935 they had moved to Bay City, Michigan. On the 1940 census, William Elwell's occupation was "foreman, crane manufacturing." My guess is that, while in Cleveland, William worked for the Brown Hoisting Machinery Company, located at the northwest corner of East 45th Street and Hamilton Avenue.I learned the location of the Brown Hoist building from the article, The Brown Hoist Building, at ClevelandAreaHistory.com, and verified it by using Google Maps Street View. The building is still standing. In 1931, Industrial Works, of Bay City, Michigan, and Brown Hoist, consolidated their operations. Evidently as a result, William Elwell relocated to the plant in Bay City.A history of Brown Hoist Machinery can be found at Brown Hoisting Machinery Company, and a history of Industrial Works/Industrial Brownhoist can be found at Industrial Works (1873-1983)aka: Industrial Brownhoist.

Bay City is where Kathryn Elwell, on February 14, 1942, married Myles Boucher, a salesman, living in Bay City also. They had at least one child. Myles died October 4, 1960 and is buried in St. Patrick's Cemetery, Bay City. Kathryn died October 11, 2010.

Kathryn Elwell's father William, was born October 22, 1882, in Cleveland, the oldest known son of William Elwell and Emma Frederick. That William was born January 12, 1859, in England, most likely in Tynemouth, Northumberland, one of at least seven children of John Elwell and Martha Graham. The family is on the 1851 census of West Bromwich, Staffordshire and the 1861 census of Tynemouth. John Elwell died in Cleveland in 1877; I couldn't find an exact death for his wife Martha, his son William or William's wife Emma.

The Fredericks and Schultzs

The Schultzs and Fredericks were listed one after the other on the 1870 Census of Perrysville; John Schultz was a farmer and John Frederick was a hotel keeper. I wondered what kind of place Perrysville was, to have a hotel and farm next to each other, then I read that it was

"a stopping point for merchants and farmers taking their goods to the markets in Pittsburgh. It was a stagecoach stop and an early home to hotels, churches, merchants and inns."From the article Perrysville, Pennsylvania, from Wikipedia, the free encyclopedia.

A 1906 map of Perrysville indicates that the White House Tavern was on the land of a John Schultz. It would be interesting to find out if this is the same Schultz family and if the tavern was the hotel that John Frederick managed. A local history society or library would probably know the answer, or how to find it. 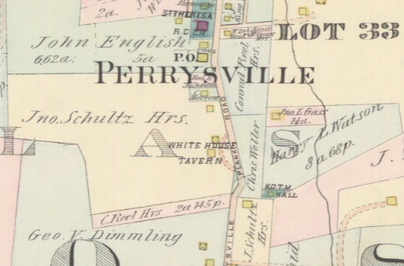 As for birthplaces, John Schultz said he was born in Württemberg, Germany. His wife, Magdalena Seiler, said "Germany" part of the time and "France" the other part, leading me to believe she was born in the Alsace region or nearby. There were a few Seiler/Saylor families in Berks County, Pennsylvania, who also said they were from Alsace, so that might be a lead for a future researcher.

I had time to spend on Kathryn's father's side of the family because I had already worked on the Egans for a first cousin. Kathryn's mother, Mary Egan, was born October 17, 1886, the fourth known child of William Egan and Ellen Boland. The death record of William's brother Timothy (July 12, 1882, Cleveland) said he had been born in Roscrea Parish, County Tipperary, Ireland, so I assume that is where William was born also. Their parents were Timothy and Sarah.

The Bolands and the Dowds

Finally, Ellen Boland was born November 11, 1854, in Ireland, the first known child of William J Boland and Catherine Dowd. The death record of Ellen's sister Mary (February 19, 1881, Brecksville, Ohio) said Mary had been born in Finod, County Sligo, Ireland. Her father William's parents were Patrick Boland and Mary Sweeney; her mother's parents were Frank Dowd and Anna Devine. There aren't baptism records available for Easkey Parish for the time during which the Boland children were born, but I found enough traces of those surnames in the Finod/Easkey area of Sligo to convince myself that I had the right place.

The records were there, so I was able to trace all four sides of Kathryn Elwell's family back to the early 1800's–three of them to the country from which they emigrated. I think that the Seiler family should be "do-able" as well, if someone had the time and skill for the German or French research.

Sources and more information are in the Ohio Families section of this site.

If you are a relative or descendant of Catherine Elwell you are welcome to download the class picture and pass it on. If you would like a larger image with possibly better resolution, contact me.

The map of Perrysville in 1906 comes from the G.M. Hopkins Company Maps collection at the University of Pittsburgh "Historic Pittsburgh" site. Title: Ross, Perrysville. Plate 38.