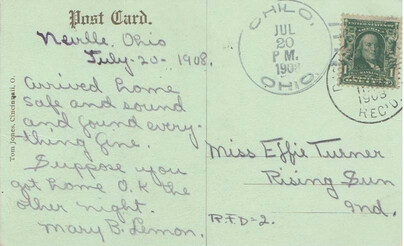 Arrived home safe and sound and found everything fine.
Suppose you got home O.K the other night.
Mary B Lemon.

What can we learn about these two young ladies? And how did they know each other?

What first aroused my curiosity about this postcard was the locations of the sender and receiver, and the picture of the Sinton Hotel in Cincinnati, Ohio, on the front side. Rising Sun, Indiana, is 36 miles from Neville, Ohio, as the crow flies, but 64 miles today via the interstate, a route which takes the traveller through Kentucky. In 1908, the journey would have been considerably longer.

Cincinnati is about half way from one place to the other. So my working theory was that the two ladies met in Cincinnati, possibly at a teachers' conference, and struck up a friendship. A bit of research squashed that idea. Although Lizzie Turner was a teacher, Mary Belle Lemon was only 16 when the card was written. So did they attend a religious meeting of some kind? Had Mary Belle's older sister accompanied her? At the end of the day, both questions were unanswered. 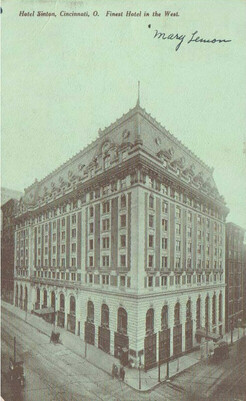 The other two possibilities for the common bond between Mary Belle and Lizzie were 1) that their two families were part of an extensive riverfront community along the Ohio River, or, overlapping with that idea, 2) that the two towns were tied together through family relationships. As it turned out the last option was the most likely scenario, from what I could tell.

Mary Belle Lemon was born May 16, 1892, in Washington Township, Clermont County, Ohio, the second daughter of Edwin Wallace Lemon and Clara Belle Galbreath. Her sister Clara Edith was born in 1888. By 1910 the family had moved from Neville to New Richmond, then by 1914 Edwin had evidently retired and they were living at 449 Washington Avenue, Bellevue, Kentucky. Mary's parents and sister died in Bellevue, while Mary herself died November 21, 1974, in Cincinnati.

Mary Belle was married briefly to John Henry Laskey, a World War One veteran. He enlisted in Fort Thomas, Kentucky, in August 1917, and was discharged May 5, 1919. During the war, he contracted tuberculosis and was treated for 8 months during 1923 and 1924 in Dayton, Ohio. It looks like he went directly from there to being a patient at Fort Whipple, Arizona, which had been converted into a hospital for respiratory patients. Mary and John were married in Flagstaff, Arizona, on September 6, 1924. John died in the Fort Whipple Veteran's Hospital on February 26, 1927, and Mary never remarried.

Effie M Turner was born August 21, 1886, in Sugar Branch, Switzerland County, Indiana, the second of five children of Martin V Turner and Ellen Harris. She and her parents were living in Quercus Grove, Posey Township, Indiana, in 1900 and 1910, the nearest post office in 1908 evidently being in Rising Sun. Effie married Bernard H Galbreath on June 8, 1910, at her parents' home. Bernard died at the age of 44; Effie lived to be 93, dying March 26, 1980. Both are buried in Rising Sun Cemetery.

As postal cover articles on this website go, my success rating for this one was about a "4". The only proven link I found between Mary (Lemon) Laskey and Effie (Turner) Galbreath is this: Effie's husband, Bernard Galbreath, was Mary's second cousin. The great grandparents of both were Robert Lawful Galbreath and Katharine Harvey. Was this enough of a bond for them to meet in Cincinnati in 1908? I don't know.

None of the information was very hard to find. I had a bit of trouble with Mary's marriage in Arizona, until I realized that both bride and groom said they were from Cincinnati. Everything was available either at familysearch.org or ancestry.com. There are family trees for both Mary Lemon and Effie Turner at familysearch.