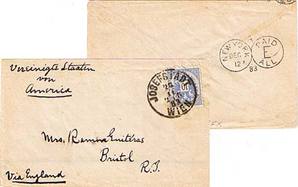 About December 1883, Mrs Ramon Guiteras of Bristol, Rhode Island, received a letter from Vienna, Austria.1 Who was Mrs Guiteras, and whom did she know in Vienna?

Elizabeth Manchester (Wardwell) Guiteras was born November 6, 1827, in Bristol, Rhode Island, the daughter of Benjamin and Elizabeth Wardell.2 On September 27, 1853, she married Ramon Guiteras, born August 4, 1811, in Matanzas, Cuba, son of Ramon Guiteras and Dona Gertrudis Font.3 Elizabeth and Ramon were living in New Bedford in 1855.4

Elizabeth's son, Ramon Benjamin Guiteras, studied medicine, graduating from Harvard Medical School in 1883. He went on to become a renown physician and surgeon in New York City, and founded the American Urological Association. He died of meningitis in New York8 on December 13, 1917.7

Does this help us answer our original question—Who wrote to Elizabeth Guiteras in 1883 from Vienna? Yes, since according to a biography of her son, "after graduating from Harvard Medical School in 1883, Guiteras spent 2 years studying in Paris, Vienna and Berlin under the eminent surgeons of the time."9 So evidently Ramon found time between his studies to write home to his mother in Rhode Island.

I have limited the scope of this article to identifying the sender and recipient of the letter from Vienna. For a full biography of Dr. Ramon B. Guiteras see the .pdf file, Genevieve M. Crane, and David A. Bloom, Ramon Guiteras: Founder of the American Urological Association, Surgeon, Sportsman and Statesman. For a genealogical account of the Guiteras family, see the .doc file,  http://www.latinamericanstudies.org/filibusters/Guiteras-Book.doc. For an obituary of Dr. Guiteras see "Dr. Ramon Guiteras, Noted Surgeon, Dead" in the New York Times.