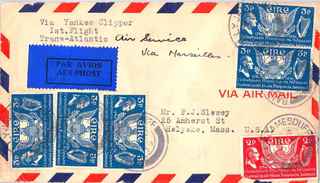 I came across P.J. Slowey while looking through some postal covers at the Jim Forte Postal History site. In 1939 he received a letter from Ballyjamesduff, Ireland.The image of the envelope is used by permission of the Jim Forte Postal History site and can be found on this page of the site, unless it has been sold. I am not connected with the site. As a genealogist I wondered if that was his place of birth.

I've done a few of these postal cover articles and they are usually a challenge, but Patrick Slowey was one of the easiest persons I have researched. I'm not going to bother listing most of the sources. If you type his name into the boxes at Familysearch, you will find almost everything you need. To find his trips through Ellis Island, start at stevemorse.org. A few bits of information were only at ancestry.com.

Patrick was indeed born in Ballyjamesduff, County Cavan, Ireland, March 2, 1885, the son of Alexander and Catherine (Kelly) Slowey. He is on the 1901 Census of Ballyjamesduff in his brother Thomas' household, along with his widowed mother and his brothers Alexander and James. National Archives of Ireland, 1901 Census of Ballyjamesduff. His father's name comes from Patrick's passport application in 1919, which was on ancestry.com. His mother's maiden name can be found at Familysearch in some of the records of her children's births.

Patrick came through Ellis Island at least three times: February 19, 1906, as an immigrant; July 11, 1911, with his brother James; and March 23, 1920, as a citizen. Patrick worked most of his life for the Holyoke Belting Company: first as a salesman in upstate New York, then as a company official and later President in Holyoke itself. He died January 15, 1965, in Holyoke and is buried in St. Jerome Cemetery.Larry Murray & Carole King Murray Family rootsweb database for Patrick Slowey.

Patrick's mother seems to have died about 1919 or 1920. When Patrick applied for his passport in June of 1919, he said his reason for travel was to visit his mother before she died. In December he seems to have sent the passport in for renewal, saying he was unable to make the trip as planned.U.S. Passport Applications, 1795-1925, at ancestry.com. Then in March 1920 he returns through Ellis Island. The Civil Registrations in Ireland should have his mother's death.

Since Patrick was so easy, I thought I'd try to find out something about his wife Elizabeth. Ireland was partitioned in 1922, so the 1930 U.S. Census was the first to distinguish between the Irish Free State and Northern Ireland as a place of birth. Elizabeth's information said she was born in the North. The 1940 Census says she was born in the Irish Free State, but the census indicates that her husband provided that information.

I had the hardest time finding Elizabeth's maiden name, until I Googled "Patrick J Slowey Syracuse" and found an article in the August 9, 1938, Ogdenburg Journal, page 3, which said:

**Chippewa Bay**
Mr. and Mrs. Patrick J. Slowey and family arrived here by motor on Wednesday from Holyoke, Mass., to spend a month at their summer cottage on Marjorita Island.

Lieutenant William E. Nolan of New York arrived here by motor on Thursday evening to spend part of his annual vacation with his sister and brother-in-law, Mr. and Mrs. Patrick J. Slowey.August 9, 1938, Ogdenburg Journal, page 3. This is a .pdf file. The article is in the upper left corner of the page.

I had already looked at the Italian Genealogical Group website for a marriage record, searching for Slowey, but to no avail. This site has indexed many vital records for the New York City area for the late 19th and early 20th century, not just for Italian couples but for all marriages.

I went back and searched for "Elizabeth Nolan" and found the following:

Clicking on the groom lookup button got me this:

No wonder I didn't find him. They indexed his name as "Siowey" instead of "Slowey." But anyway, they were married in Manhattan on April 5, 1915. And they are together on the (June) 1915 NY State Census of Manhattan at 4509 Sixth Ave, Patrick already a salesman.

In December 2018 I took another look at this couple and found the marriage record now indexed at familysearch. It said that Elizabeth's parents were Philip Nolan and Bridget Callahan.

Elizabeth may have died in Holyoke about 1963 or 1964. In the 1964 Holyoke City Directory she and Patrick are listed at different addresses on Linden Street. In the street cross reference section both of these addresses are for the Buckley Manor Nursing Home. And Patrick's obituary does not mention Elizabeth as a survivor.

Unfortunately, I didn't find enough information for Elizabeth Nolan to definitely determine her birthplace. My best guess is that she was from County Fermanagh, but it is only a guess. There is a couple named Philip Nolan and Bridget Callahan who have at least six children on the birth records in Greagh Townland, Lisnaskea Registration District, Fermanagh, including an Elizabeth. However their Elizabeth was born 18 January 1878, which is about 8 years earlier than Patrick Slowey's wife Elizabeth said she was born.

Perhaps Elizabeth was a few years older than Patrick, and lowered her age on the census records to better match his. Her passenger manifest would have been helpful in that regard, but I couldn't find it. Likewise for a census listing for Elizabeth before she was married.