In the last article, William D Anderson, of Richmond, Virginia, we learned that William Dudley Anderson had a stage name of Bobby Carroll and died in Chicago in 1932. Can we fill in anything else in his life between his marriage to Mary Rodgers in 1887 and his own death?

Actually, the records themselves so far are pretty sparse for Dudley Anderson.

His 1930 Census said that he was a veteran of the Spanish-American War, which took place in 1898,1 but I couldn't find a record of his service–not all the information is on line. And he is not the W.D. Anderson who married Lillie Birchfield in Bell County, Texas, in 1901.2 That couple is in Justice Precinct 5 in McLennan County, Texas, in 1910.

We know that by 1904, Dudley had married Sarah "Lillie" Jacobs, and settled down in Chicago, since their daughter Evelyn was born there in August of that year.3 A 1906 newspaper article also said he was "of Chicago." Their daughter Evelyn died in 1936, and Dudley's wife was called Sarah Jacobs on Evelyn's death record.3

In 1920, Robert, Sarah, and Eva Carroll, age 14, were living in a hotel at 231 East Garfield Blvd. in Chicago, Illinois. Robert's occupation was "theatre, medicine show, working on his own account."

The man listed above Robert on the census was James J McNulty, a showman with the circus. He shows up on a few pages at Circus History.org. I don't know if Bobby Carroll worked with him, but I don't think it is just a coincidence that they were living in the same hotel. The hotel housekeeper's son was a treasurer for a theater as well.4

In 1924, Robert and Sarah's daughter, Eva, married Arthur J Meader. In 1930, she and Arthur were living in the Columbus Park Hotel at 311 North Central Ave, Chicago. Eva's mother was with them and this time she is listed as Lillie Carroll, not Sarah. Arthur was a lineman for a telegraph company.5

In the same year, Robert Carroll was living on his own, at the Monarch Hotel at 517 North Clark, Chicago. He was an unemployed theater actor. All of the thirty-two hotel residents were men on their own and many were out of work. There was one other actor in the building, a 70 year old single man named Frank Healy, also out of work.6

I would like to think that living apart from his family was a "career move" on Dudley's part–that maybe he was closer to the theater district–but I don't think so. I imagine he was more likely "down and out."

I don't know when Dudley Anderson began performing as Bobby Carroll, but the first mention I found of him was at the Odeon Theatre in Baltimore in October 1887, on the same bill as his wife, Mary Rodgers, who used the stage name Minnie Kelly.

They were at the Centre Square Hall and Restaurant in Allentown, Pennsylvania, for the week beginning January 21, 1889. After that they seemed to shift their career west. August 1890 finds them in Butte, Montana, and in December 1891 they are in Deadwood, South Dakota. In Deadwood, Mary Rodgers and Dudley Anderson apparently parted and went their separate ways–they do not appear together again. The April 12, 1895, edition of the Elwood, Indiana, Daily Press calls Bobby Carroll's wife "Caroline Gardner" not "Minnie Kelly."

April 1895 in Elwood, Indiana, seems to have been one of the turning points in Dudley's career. He was running a show of his own at the Elwood Opera House 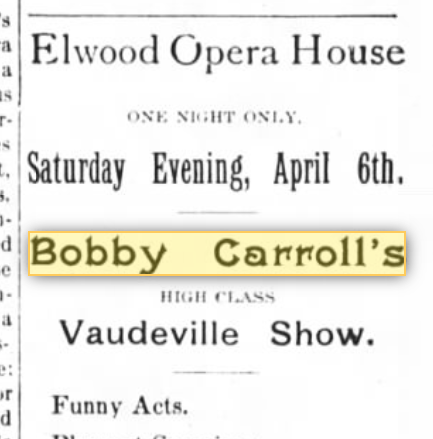 but ran into financial and marital problems. The April 11, 1895, Elwood Free Press carried news of local court proceedings. A judge had awarded James Howard $27 in back wages owed to him by Bobby Carroll. The article asked "Will he get it?"

The Friday, April 12, 1895, issue of the same paper carried a long article about Bobby Carroll's trials and tribulations. "Caroline Gardner" had left him the previous Monday and Bobby began to drink heavily and neglect his business. On Thursday afternoon, Bobby was on the 2:26 train westbound, leaving behind debts to the newspapers and merchants of Elwood, as well as to his actors and employees. His actors were talking about putting the word out in the trade so that he would never work again. 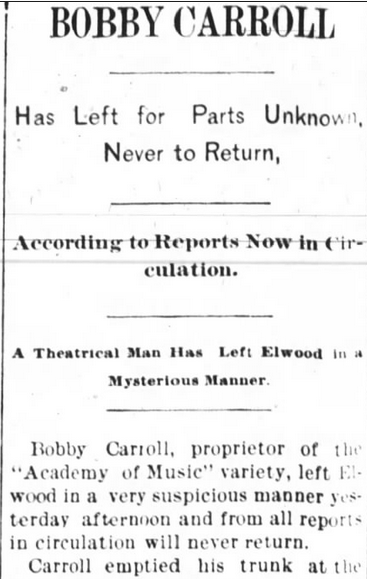 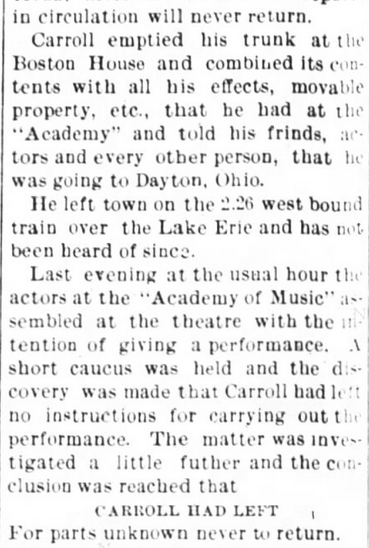 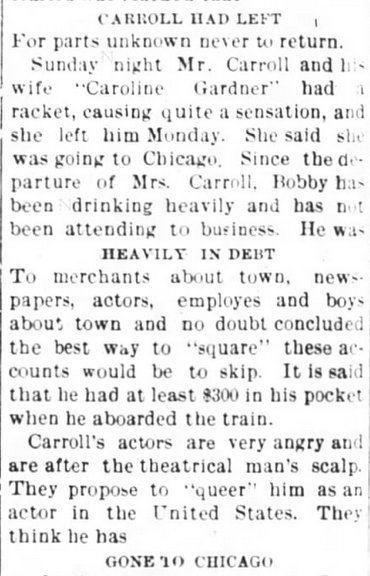 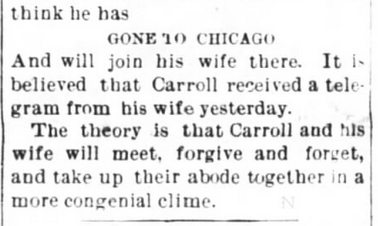 I didn't find a trace of Bobby Carroll for the next few years except for a possible sighting in Los Angeles in 1899, but no mention is made of that man's occupation or why he was in Los Angeles.

The 20th century opened for Bobby Carroll in August 1902, in Elmira, New York, at least according to the available newspapers. He hit his high point a few months later when, according to a promotional piece in the New York Clipper, he was in his 12th week with Quinlan and Wall's Imperial Minstrels.

It included an appearance at the Colonial Theater in Akron, Ohio, which prompted this bit of advance publicity: 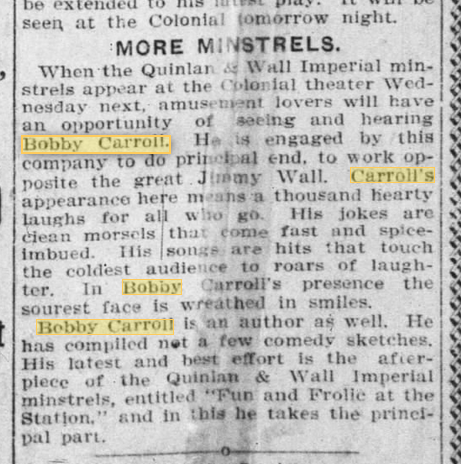 He was still with Quinlan and Wall in December 1902, when they appeared in Paducah, Kentucky.

The next few years have Bobby Carroll working solo, and usually in Illinois or surrounding states: May 1904 in South Bend, Indiana, and Freeport, Illinois; January 1905 in Waukegan, Illinois; May 1905 in Minneapolis, Minnesota; April 1906 in Waterloo, Iowa. The Waukegan article called him "of Chicago", which he would have been by then.

1906 brings a few mentions of "Mr and Mrs Bobby Carroll." The "Mrs" this time must have been Sarah Jacobs. They were together in Waterloo, Iowa, later in April 1906 and in Oshkosh, Wisconsin, in June 1908.

After that, it was Bobby on his own in various locations around the Midwest, including this show in Rockford, Illinois: 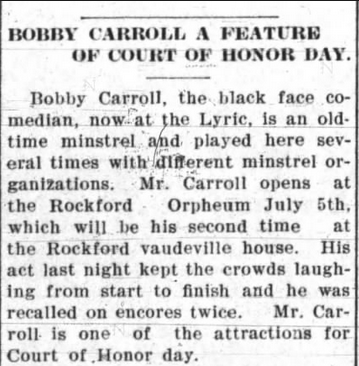 He was still acting in 1927 and was in Sheboygan, Wisconsin, in October of that year. The last possible mention I found of him was in the Brooklyn, New York, Times Union, April 8, 1928, page 141, on a bill with Ted Eddy and his "College Misfits." It seems likely this Bobby Carroll was Dudley Anderson, but I can't be positive since it was much farther east than I had found him down to then.

The Brooklyn show might have been Bobby Carroll's last stand. I can't say he went out on top, but he did have a 40+ year career. On the 1930 census he was living apart from his family, in a run-down hotel in Chicago. Most of the residents, including him, were unemployed. He died in 1932.

And that just about sums up what I know about this gentleman. It must have been a long way from being William Dudley Anderson, son of a court clerk in Richmond, Virginia, to Robert "Bobby" Carroll, unemployed actor in Chicago, Illinois. Especially when the road takes you through Oil City, Pennsylvania, Butte, Montana, and Deadwood, South Dakota.

For more information and for the genealogy sources for Dudley Anderson, find Anderson in the Ohio Families section of this website.

The image of the medicine show poster comes from Legends of America/Patent Medicine.