The Hamilton Family and the 1889 Johnstown Flood

In 1889 my great grandparents Joseph and Eckie Hamilton were living in and managing a boarding house at 136 Jackson Street, Johnstown, Pennsylvania. On May 31 of that year the Johnstown Flood hit the city taking 2209 lives, the greatest one day loss of life on U.S. soil until September 11, 2001.

Two accounts of our family's survival through the flood have been passed down:

1. My father told us that his father James (Joseph's oldest son) worked in a livery stable down in Johnstown and jumped on a horse and rode up the hills to home when the dam burst. We have a picture said to be of the horse that he rode.

"We have an interesting story passed down to us from Grandpa Tom, about their escape from the Johnstown flood that you may have not heard. They fled with the help of the big white family horse. Tom, age 4, was seated on the horse, when either Joseph or older brother Jim, (we are not sure) led the horse to the hillside through 3 feet of water with Had (Henry) hanging onto the horse's tail." 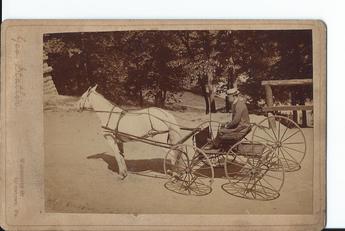 Why were they were able to leave in time?

The Johnstown City Directory of 1889 says that the rivers and creeks had overflowed their banks from the heavy rain and there was 1 to 3 feet of water in the streets in the 3rd Ward during the day of May 31. It then says:

"The first intimation the doomed citizens had of the approaching demon of destruction was the ringing of bells and blowing of whistles. This was done by those in East Conemaugh and Woodvale, when they saw the danger, to warn those in its path below."

"it was later reported that a freight engineer named Hugh Clifford had raced his train from above the depot across the stone bridge, his whistle going the whole way, and a man named Charles Horner blew the whistle over at Harry Swank's machine shop."

What happened to some other people?

Joseph's sister and brother in law, Emma and Thomas McClelland, were at 42 Market Street, Johnstown. They and their son James, born in February 1889, survived and remained in Johnstown.

Joseph's sister Annie Hamilton had not yet married. I don't know if she was in Johnstown on the day of the flood, but if so she survived. She married David Lavely in Johnstown in 1898 and died in 1916.

Joseph's sister Maria had married David Edwards about 1868 and was living in Altoona at the time of the flood.

There were three men living at the boarding house in 1889. One of them, Ed Bartholomew, is listed as "unaccounted for" in the City Directory. Josiah Kauffman evidently survived, married Juniata Kniepper, and was living in Johnstown in 1900. The third, Isaiah J Bosler, may be the man of the same name living in Elyria, Ohio, in 1910. That man had been born in PA about 1865 and had married a woman from Pennsylvania in 1895.

What happened to the Union Hall or "opera house?"

The section of the 1889 City Directory that was written before the flood says this on page 153:

"Johnstown has but one theater building. It is situated at the corner of Franklin and Washington streets, and Messrs. Weaver & Jordan are managers. It is a frame structure, but two stories in height, and does not impress one as being either large or beautiful, but inside it is fitted up very nicely."

A wood frame building on Washington Street didn't stand much of a chance, so it is no surprise that Annie (Hamilton) Lavely's obituary states:

"Mrs. Lavely's father was in charge of the old Union Hall, corner of Washington and Franklin streets, Second Ward, which was washed away in the Johnstown Flood."