On Friday August 30, 1872, the Wallace Sisters–Jennie, Minnie, and Maud–appeared in Johnstown, Pennsylvania, most likely at Johnstown's theater, the Union Hall, at the corner of Washington and Franklin streets.

The photograph accompanying this article probably has been in my family ever since that date, because my great grandfather Joseph Hamilton (at the far right) and his father, James D Hamilton (at the far left), were bill posters and evidently hung the signs advertising the event. James was also the caretaker at the Union Hall. 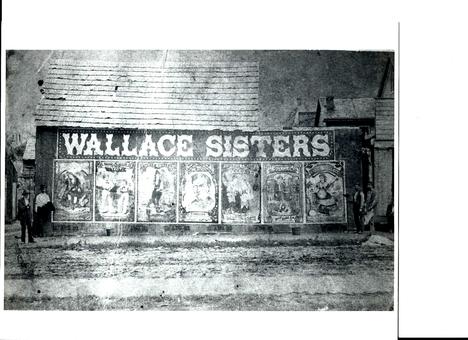 I was able to date the photograph as follows: the poster states that the event is to occur on Friday August 30. Joseph Hamilton was born in 1846 and James D passed away in January 1881. During the 25 years that their lives overlapped, August 30 fell on a Friday only in 1861, 1867, 1872, and 1878. Joseph is older than 15 in the picture, so we can eliminate 1861. For a long while I could only narrow it down to the three remaining years.

Enter the Wallace Sisters: They can be found on the 1870 Census of New York City with their mother Matilda. Jennie is 18, Minnie is 9, and Maud is 7. I think we can agree that Minnie is older than 6 in the picture and Maud is older than 4, so that would eliminate 1867. Besides, a brief biography of Jennie Wallace, no longer online, said that although she made her New York debut in 1867 and her younger sisters started on stage the following year, the family did not go on tour until 1869.1870 Census New York City, Matilda Wallace household, Ward 15 District 2, Roll: M593_993; Page: 439B, census page 54, dwelling 180, family 507.

To pare the time frame down from the other end, we can look at the 1880 census of Matawan, New Jersey. There we find Jennie (Wallace) and her husband Benjamin Dobson, with a son Benjamin born in May 1877.Benj F Dobson, 1880 Census Matawan, Monmouth, New Jersey, ED 113, sheet 211C. Although it's not impossible that she was still touring, I think it unlikely. In addition, Minnie and Maud are considerably younger than 17 and 15 in the poster. So the event and the photo most likely took place in 1872.

As a sidenote to the Johnstown connection: along the way I found that Lucie K Villa, the daughter of a fourth Wallace sister, Agnes, was born in Johnstown on April 10, 1872. Agnes had married Samuel B Villa in 1866. He was an entertainer also, and Agnes–either by then or not much later–had a theater company of her own.

Rather than go into the entire saga of the Wallaces, I suggest that the inquiring reader search various combinations of first and last names of the sisters, along with "Dobson" and "Villa". There were six sisters, all actresses along with their mother Matilda. The next generation in most of their lines were in show business also, and the third and fourth generation as well, where I could find them. But at this point we are into the realm of the living, and the story must come to an end.

I have a larger size of this photograph which might provide better resolution. If anyone is interested, email me.

Details of my research on the Wallace family can be found here.