This website includes a picture of the 1922 second grade class at Holy Name Parish on Broadway on the southeast side of Cleveland. My mother was in that class and identified most of the children in the picture. She identified the fourth young man from our left in the third row as Vincent Hurley. There was a Vincent Hurley living in the area, described below, who is probably him.

Vincent was born June 9, 1912, in Ohio, the second of two sons born to Michael J and Anna (Donovan) Hurley. His older brother, Francis Joseph, had been born March 22, 1911. Vincent's childhood must have been a bit of a struggle–his mother died when he was eight, and I didn't find Vincent on any records until the 1940 census, when he was living with his mother's sister, Mary (Donovan) Toohig's family, at 4139 East 119th. Vincent enlisted in the US Army on May 8, 1942, for the duration of the war. He was living in East Cleveland when he died June 7, 1970, and is buried in Calvary Cemetery. He never married.

And that's all I know about Vincent. As for his family . . .

With a lot more effort than usually required, I managed to find out something about Michael J Hurley and his family. Michael was born May 15, 1872, in Cleveland, the oldest son of Timothy Hurley and Ellen Gibbons. He was married twice, outliving both wives. His first family was with Ellen Lee, whom he married October 30, 1895, most likely at Holy Name Church. They lost a son 3 days old in 1896, then had a daughter Coletta and a son Emmett before Ellen died October 25, 1900. Coletta's records were about as scarce as Vincent's. She, Francis, and Vincent may have been in foster homes for a while. Only Emmett consistently showed up in the records.

Michael waited more than nine years before remarrying. He and Anna Donovan were wed on January 11, 1910, again probably at Holy Name. They had two children as mentioned, Francis and Vincent. Anna died April 18, 1920, of "insanity at menopause." Contributing to her death were "anemia and exhaustion." She and Michael were not living at the same address when she died, so it doesn't look like her dying was easy on anyone.

There were two Hurley families in Newburgh in the 1880s and early 1900s, but they might not have been related as I first suspected. The death record of Michael Hurley's sister Mary (Hurley) Broderick said that both their parents had been born in County Cork. For the other family, who said they were from Mayo, see Bernice Hurley, 1922, Newburgh, Cleveland.

The Donovans were a family you dream about researching. The earliest American record for Anna Donovan, the 1880 census of her parents's household, said she was born about 1870 in Wales. I clung to that birthplace, despite later records saying things like "Mannershire, England" and "Ireland." And sure enough, she was born in the first quarter of 1871, in Ebbw Vale, Monmouthshire, Wales, the first child of Garrett Donovan and Bridget Rice. 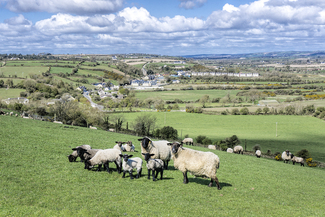 Bridget's death record (Cleveland, Ohio, July 9, 1925), said she was born in Cork, Ireland, the daughter of Percy Rice and Mary Murphy. That was close enough to the truth to find her baptism record in Ballymacoda and Lady's Bridge parish, Diocese of Cloyne, County Cork, on January 6, 1851. Her parents were not Percy and Mary, but Pierce Rice and Johanna Murphy. Pierce and Johanna were married February 25, 1843, in the same church.

When you find a few lone parish records like that, though, you always have a lingering doubt that there might have been two couples with the same names that had daughters named Bridget—and you found the other one. I have learned the hard way that no matter how unusual the name, there are usually two people living in the same place at the same time with the same name.

But not this time. I found the Rices and Donovans in the same household on the 1871 Census of Ebbw Vale, Wales: Pierce, Johanna, four children including Bridget, Garrett Donovan, and daughter Johanna. Pierce's surname on most of the records in Wales was spelled "Rees." I wonder if that was Welsh for "Rice." At any rate, there they were. The 1861 Census even identified the Rices' birthplace as Balymacody, Co. Cork.

Although Vincent Hurley had no descendants, I know that he had Toohig cousins who did. And I'm not sure about his brother Francis or his aunt Cecelia (Donovan) Mahon. At any rate, I'm sure there is someone out there who would appreciate learning their Rice-Donovan home parish in Ireland.

For sources and more details on the Hurley, Donovan, and Rice families, see the Ohio Families section of this website.

The picture of Ballymacoda was taken by John Finn, of Ballymacoda. It can be found on flickr at Ballymacoda, and is used under the Creative Commons Attribution-NonCommercial-NoDerivs 2.0 License.