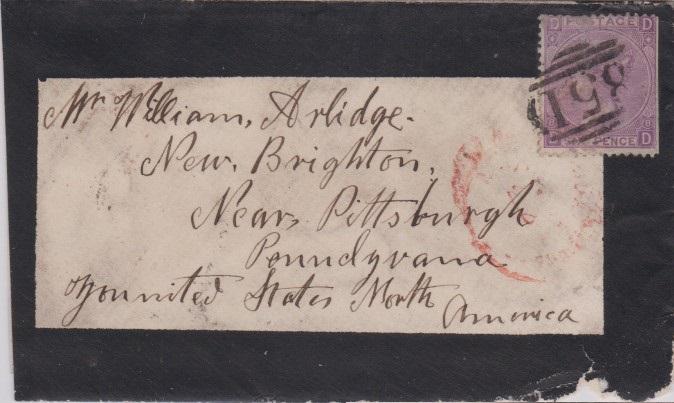 On August 4, 1870, Mr William Arlidge of New Brighton, Pennsylvania, received a letter edged in black from Weedon, Northamptonshire, England. Who sent William this letter, and what sad news prompted its sending?

The 1870 US Census finds William Arlidge and his daughter Hannah in Ward 2, New Brighton, Pennsylvania. William was a male citizen, age 70, who was born in England and worked as a clock repairer. Hannah's age was given as 25, though she was actually 10 years older, as we shall see. She also was born in England. The date on the census sheet was June 30, 1870, not long before the letter William received was mailed.For the date and place of mailing, see the next article, Samuel Arlidge, of Deddington, Weedon Bec, and Nether Heyford, England.

The Arlidges had moved to New Brighton sometime after 1867 or so, since William is listed in the Pittsburgh City Directories through 1868 as a clock maker in Allegheny City.Allegheny City, Allegheny County, Pennsylvania, was annexed by its neighbor, Pittsburgh, in 1907.

The 1850 Census of Allegheny City provided the names of other members of the Arlidge family. William, age 57, is joined by his wife, Elizabeth, age 56, and daughters Elizabeth (21), Mary (18), and Anna or Hannah (16). All were born in England.

This gave me enough information to find the Arlidges in England in 1841, in Barford St Michael, Oxfordshire. William was a pot maker, age 40. His wife Elizabeth and daughters Charlotte (15), Ann (15), Elizabeth (11), Mary (7), and Hannah (5) complete the household. All the daughters were born in Oxfordshire, but William and Elizabeth were born outside the county.

Images of the Church of England parish registers for Oxfordshire were available at ancestry.com, and provided a wealth of information about William and his family. He and Elizabeth Gregory were married 28 January 1823 in the parish and all the children's baptisms were recorded there as well. William was a widower when he married Elizabeth–his earlier marriage to Lucy Bennett was on 17 April 1817. The marriage register noted that parental consent had been given, evidently for William, since Lucy's burial record (19 June 1822), said she was 33 when she died.

There is a brief family tree for William at William and Samuel Arlidge Family Trees.

All well and good so far, you say. We have William Arlidge traced back to within 30 miles of Weedon, Northamptonshire, where the letter originated, but who sent it and why?

One clue in William's records that will lead us to the answer is his residence at the time of Charlotte and Ann's baptisms. On Charlotte's record it said her parents were living at the Brick Kiln, Deddington. On Ann's record "Brick Yard" was crossed out, leaving just "Deddington." Keep that in mind as we continue to the next article: Samuel Arlidge, of Deddington, Weedon Bec, and Nether Heyford, England.

The image of the envelope sent from Weedon, Northamptonshire, to New Brighton, Pennsylvania, is from Jim Forte's Postal History site and is used with his permission. It was for sale at the time of this writing. I am not connected with that site in any way.