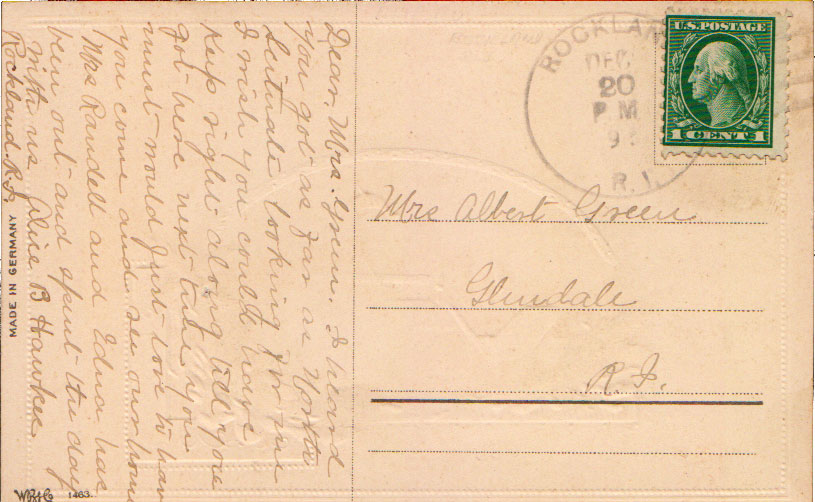 In December 1915, Alice B Hawkes of Rockland, Rhode Island, sent a postcard to her friend Mrs Green which read:

Dear Mrs Green, I heard you got as far as North Scituate looking for me. I wish you could have kept right along till you got here. Next time you must. Would just love to have you come and see our home. Mrs Randell and Edna has been out and spent the day with us.
Alice B Hawkes
Rockland, R.I.

This postcard caught my attention because Rockland, Rhode Island, no longer exists. It was leveled to make room for the Scituate Resevoir. More on that later. Meanwhile, what can we learn about these two women?

Alice's father died toward the end of 1881 or the beginning of 1882, and is buried in Barton Wesleyan Methodist Chapel burial grounds, Salford.Thomas Brownsword, death, 1882, Barton upon Irwell, Lancashire, at https://www.freebmd.org. Thomas Brownsword, findagrave page. 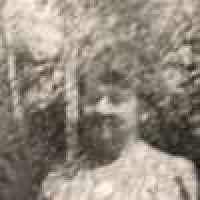 On December 20, 1897, Alice Brownsword was married to Waldo L Hawkes by Edward J Ayres, a minister at the Pascoag, Methodist Church. At the time, both were living in Pascoag. Waldo was an assistant postmaster. This was the first marriage for both of them. Rhode Island, Town Clerk, Vital and Town Records, 1630-1945, familysearch, Waldo L. Hawkes and Alice Bronsword, 20 Dec 1897. Souvenir history of the New England Southern Conference : in three volumes, Compiled and edited by Rennetts C Miller (Nantasket, Mass: Rennetts C Miller, 1897) at archive.org. 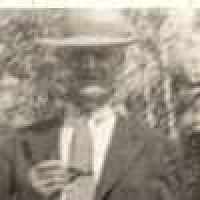 Alice and Waldo Hawkes were in Pascoag in 1900, but by the time of the 1910 census they had moved to Rockland and were renting a house on Rockland Road. Waldo was now working as a street car conductor. They were still there on September 12, 1918, when Waldo registered for the World War I draft. United States Census, 1900, Waldo Hawkes, Burrillville, ED 104, sheet 16B, family 370. United States Census, 1910, Waldo L Hawkes, Scituate, ED 275, sheet 3A, family 47. United States World War I Draft Registration Cards, 1917-1918, Waldo Lyman Hawkes, Burrillville, Local Board State Division 3.

Meanwhile, in 1915—the year Alice sent her postcard to Mrs Greene—the Rhode Island General Assembly authorized the Providence Water Supply Board to condemn 14,800 acres of land in rural Scituate. "By December 1916, notices were delivered to the villagers stating that [their] homes and land ... were to be taken and destroyed. Construction was well under way by 1921, and water was being stored by November 10, 1925."Raymond A Wolf, The Lost Villages of Scituate, (Arcadia Publishing, 2009), available in the Ocean State Libraries system and at Arcadia Publishing. 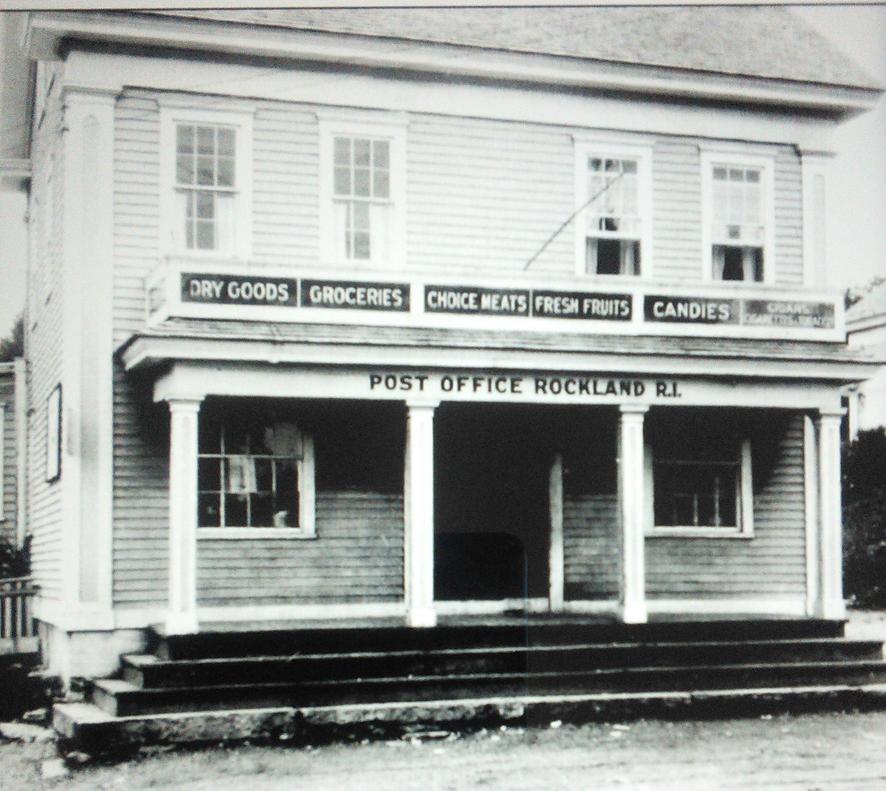 The 1941 Cranston City Directory shows Waldo and Alice at 116 Greenwood with Waldo working as a janitor at the Auburn Branch of the Cranston Public Library. They were still at that address, and Waldo was still working for the library, in the 1954 Directory. The 1956 edition says that Waldo Hawkes died October 1, 1954. There is no mention of Alice in 1956, 1957, or 1959. Recent death records for Rhode Island are not on line, but from findagrave.com we learn that Alice (Brownsword) Hawkes died in 1958. She and her husband are both buried in Smithville Cemetery, North Scituate, the same cemetery as her mother and sister. They had no children. Alice Hawkes, findagrave page. Waldo Hawkes, findagrave page. Cranston City Directories, at ancestry.com.

It seems ironic that in December 1915, as Alice expressed her wishes that her friend Mrs Greene could come out to see her home, plans were already underway that would lead to it being torn down. Still, the Hawkes fared better than most. "There were 'quite a few' suicides - possibly because townspeople, [historian Fred] Faria said, received 'peanuts, nothing' for their properties. 'The owners were compensated, but not enough.'""Lost village of Rockland remembered at history conference" by Denise Perreault, in The Valley Breeze, April 29, 2015. At least Alice and Waldo Hawkes lived out the rest of their lives, probably not as happy as they were in Rockland but alive nonetheless.

There is extensive information on Alice Brownsword's family in the familysearch tree cited above in note 1. In the next article, we will take a look at the recipient of the card, Mrs Julia (Mowry) Paine Greene.

I found the photo of the Rockland Post Office in the digital edition of The Lost Villages of Scituate by Raymond A Wolf, (Arcadia Publishing, 2009), in the Ocean State Libraries system. I am using it with his permission. The author stated that most photographs in his book were courtesy of the City of Providence Water Supply Board archives.

The photo of the SS Marathon comes from Norway Heritage.

The photos of Alice and Waldo Hawkes were on the familysearch familytree mentioned in note 1.

The postcard from Mrs Hawkes to Mrs Greene was once in my possession but is no longer.