Another James O'Rourke, Killowen to Cleveland 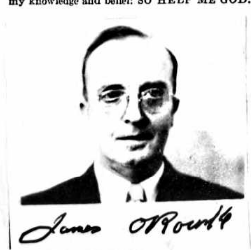 James O'Rourke was born Jul 7, 1894, presumably at home in Ballintur Townland, Kilbroney, County Down, the son of Francis Rourke and Sarah Brennan. In 1901 he and his parents were living with his grandparents James Rourke and Mary Hughes in house 18 in Ballintur. I believe this family occupied parcels 1A, 1Ba, 1C,and 1Da in the townland.

The y-DNA of a descendant of James Rourke and Mary Hughes has been tested. It matches the y-DNA of a descendant of another O'Rourke family in Ballintur on all of the first 25 markers and on 34 of 37 markers, showing that there is a common ancestor to these two families sometime since 1500 or so, possibly more recently than that. That other family is my own, descended from James Rourke and Ann "Nancy" Colgan.

There was a third O'Rourke family in Ballintur, descended from Felix Rourke and Alice Cull. I haven't seen DNA results from this family.

All three O'Rourke families are DNA related. See the DNA articles on this site for more details.

By the way, the title of this article, Another James O'Rourke, etc., comes from the fact that my grandfather's brother, also named James, was also living in the same neighborhood in Cleveland at the time. These two families liked the given names of John and James. If you look at their records for a few of the generations, it seems that if the head of one family at any given time was "John" then the head of the other was named "James."

For an article on James' wife, see: Mary Burke of Cloondergan, Galway, and Cleveland, Ohio.

There is much more on all these families in the Ohio Families tree on this website.