It's hard for me to pass up looking for an Irishman's county of origin, so after finding Another James O'Rourke, Killowen to Cleveland, I thought I would try to find his wife, Mary Burke, in Ireland.

There were, and probably still are, a lot of Mary Burkes in Ireland. So first I looked for Mary's siblings. At ancestry.com I searched for anyone named Burke living in Cleveland whose parents' names were the same as Mary's, namely Martin Burke and Nora O'Toole.

This found two results in the Cuyahoga County Marriage Records: Winifred Burke who married Peter Corrigan in 1930,1 and Sarah Burke who married Jeffery O'Donohue in 1936.2 Since James and Mary (Burke) O'Rourke named a daughter Winifred, this looked promising.

The next step was to search the Ellis Island records using stevemorse.org as a starting point. I found a Winifred Burke arriving Sep 29, 1924.3 She was the daughter of a Martin Burke in Cloondergan, Dunmore, County Galway, and was headed to 6800 Lucerne Ave, Cleveland. In 1920, this was the home of Michael J and Mary Burke.4

Then I searched immigration records at ancestry.com and found a Sarah Burke arriving 2 May 1927. She was also the daughter of a Martin Burke and was also headed to 6800 Lucerne Ave.5

To close it out, I looked in the 1911 Census of Galway and found a Martin and Oney Burke family, with daughters Marie, age 10, Winfred 9, and Sarah, 6, along with other children. In 1901 "Oney" is listed as Nora. They were living in Cloondergan, Addergoole, Galway.6

Believe me it is not always this easy but ... 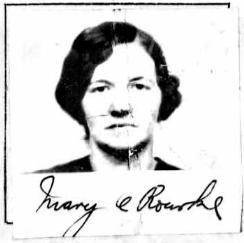 It wasn't that easy to find Mary's immigration record. First I found a Mary Ellen Burke, age 21, arriving in 1922, daughter of Martin Burke of Cloondergan, Galway. Gotta be her, right? She was going to New Jersey, but she was the first of the family to arrive, so maybe she went on to Cleveland. Wrong. There were two Mary Burkes in Cloondergan with fathers named Martin. "Ours" turned out later to be Mary Teresa.

Then I found Mary's Declaration of Intention (she was naturalized on her own account), and it said she arrived August 22, 1921, in New York, on the SS Baltic. Guess what. There were two Mary Burkes on the ship, but at least one was from Mayo, leaving "our" Mary, from Galway, finally found.

... if this were my family, this is the first place I would look for birth records for Mary Burke.

And so I did. Mary was born on September 20, 1901, Winifred on June 20, 1904, and Sarah on August 22, 1906, all in Cloondergan/Clondergan Townland, Galway, daughters of Martin Burke and Nora/Oney/Honor Toole/O'Toole. Martin and Honora were married in the Catholic chapel in Milltown, Galway, on March 11, 1899.

I don't know if any more of this family emigrated and, if they did, whether they came to Cleveland or not. I'll leave that for another day or another person.

It's the same person, but another day. Mary's brothers Thomas and John also came to Cleveland. I lost track of Thomas after his arrival (1922), and of John after his petition for naturalization (1941). I don't know what became of their brother Michael, born in 1909. Martin, the youngest known child so far, born 1912, evidently kept the farm, as he was the informant on his parents' death records.

The details and other sources for this family are in the Ohio Families section of this site. See the sidebar for the link.

and ,National Archives of Ireland, 1911 Census. Residents of a house 11 in Cloondergan, Addergoole, Galway. http://www.census.nationalarchives.ie/pages/1911/Galway/Addergoole/Cloondergan/474539/.