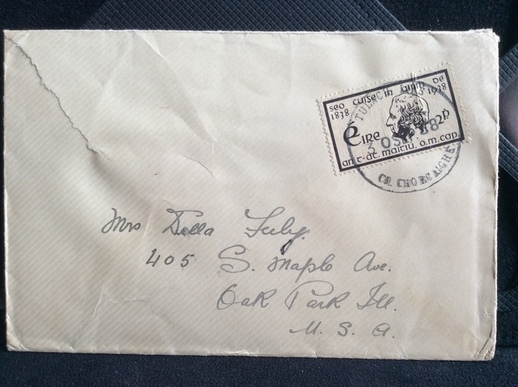 On September 30, 1938, someone in Tullylease, County Cork, mailed a letter to Mrs Della Feely, 405 South Maple Avenue, Oak Park, Illinois. Did this letter come from a relative in Ireland? If so, can it help us trace back Mrs Feely to her county of origin?

The short answer is maybe, but the American records came up short this time. Let’s start with the people who were not from County Cork.

Della Marie Sullivan was born in Illinois, most likely in Chicago, on August 26, 1902, the daughter of William Joseph Sullivan and Della Rose La Haut. She was baptized at Holy Guardian Angel Catholic Church, Chicago, on September 11. Her parents were living at 396 South Halsted at the time.

Della’s maternal grandparents were Louis La Haut, born maybe in January 1846, in Belgium, and Rose Cousineau, born maybe in February 1847, in Quebec, Canada. Both were French speaking. Not from Cork.

Della married Hubert James Feely about 1927. They were living at 137 Central Avenue in 1930 with a daughter Mary Patricia. They were at 405 South Maple Avenue in Oak Park by 1935.

There were enough records for Hubert’s family to eliminate the Feelys as well. More on that in a minute.

That only left Della’s father’s side of the family, the Sullivans. Do you have any idea of how many Sullivans there are in Cork? Zillions. If I remember right that was their home base, for lack of a better term.

The death record of Della (Sullivan) Feely’s father William, 5 May 1943, Oak Park, said that his father John was born in County Cork. But that is where the road ended. William had been born in Chicago in 1871, but for the life of me I couldn’t find a trace of his parents or of William himself before the birth of his children, starting in 1896.

Della’s husband, Hubert James Feely, was born September 24, 1899, probably in Chicago, the son of Patrick Feely and Mary Coffey. He was baptized November 26, 1899, at Our Lady of Mount Carmel Catholic Church. The family was living at 1026 Melrose Street at the time. His father Patrick’s death record (July 21, 1930, Chicago) says that Patrick was born in County Mayo on February 23, 1863, the son of Hubert and Catherine Feely.

There is a Hugh and Catherine Feely on the civil records of Killedan parish, Mayo, with children born from 1863 to 1877, but alas, no Hugh/Hubert. If these are his parents, his birth may have preceded the start of civil records for Catholics.

I have a feeling this is the right family, or at least we have the right area. I found a reference on myheritage.com to a Hubert Feely born July 4 1872, in Kiltimagh, Mayo, which is a couple miles from Killedan. His parents were Hubert and Catharine (Kelly) Feely. First names seem to run in families, so maybe this Hubert in Kiltimagh is a cousin.

Finally, Della’s mother in law, Mary Coffey, was born in County Clare, according to the Birth Certificate of her daughter Katherine Elizabeth, registered on Aug 8, 1966. I didn’t find Mary Coffey’s family in Clare.

So was Della’s letter from a relative? We’re back to “maybe” again. The family had left Cork at least 70 years earlier, but that’s not to say they didn’t keep in touch. If it was from a relative, then at least the postal cover narrows down the search to the Tullylease area, if the family starts tracing its roots. Knowing Irish families though, they probably already know exactly where they were from and have been back to visit.

For details on the Sullivans and Feelys see the here.