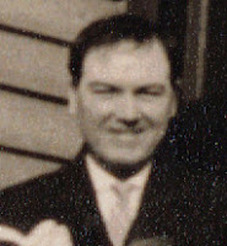 Matthew Sloan was born 27 Apr 1879, in Ballincurry Townland, Kilbroney Parish, County Down, Ireland, the son of James and Mary (Brennan) Sloan. He was baptized the same day with John Fearon and Kate Brennan as godparents.

Edited to add, and later corrected in Oct 2019:

This article was updated with some help from a Sloan relative in Northern Ireland who saw the original post. He let me know that Peter Sloan inherited his great-aunt Bridget Brennan's farm. He sold it, moved to Dundalk, Co. Louth, and bought the Century Bar. Peter died in the 1960's. His son Jack's obituary appeared in the Dundalk Argus on October 15, 2004. It mentioned Jack's brother Matthew "late of the Century Bar, Dundalk" along with Jack's surviving family.

Returning to our story, the Sloan farm in Ballincurry was supporting three unmarried adults and a Sloan nephew; it could hardly have been expected to support another family as well. So in the summer of 1900, Matt Sloan headed to America along with four other young people from the area: James O'Rourke, James Murney, and a married couple, Richard and Rose Farrell. They departed Liverpool on June 2, 1900, aboard the HMS Campania, and arrived in New York on June 9. There are separate articles about all these people on this site.

The three young men went on to Cleveland. James O'Rourke said he was going to his brother William's house and the other two said "a friend's". All three probably showed up at William O'Rourke's door one cloudy day in June. It's always cloudy in Cleveland, even in June.

Matt Sloan was naturalized in the Court of Common Pleas, Cleveland, Ohio, on September 27, 1905. At the time he was living with Edward and Anna Rodgers at 2484 Elmo, Newburgh. Everyone else from Killowen lived there at one time or another, so why not Matt?

The Sloans were living at 4073 East 78th in 1910. The whole area was criss-crossed with railroad tracks. One Sunday night, Matt Sloan–who for the first twenty years of his life probably never saw a vehicle bigger than a horse and carriage–was hit by a train on October 14, 1917, and died of his injuries. He was buried October 17 in Calvary Cemetery, Cleveland.

Note: The preceding paragraph was edited with the help of a descendant of Matt Sloan's brother Thomas, who still knew the family story–100 years after the incident happened–that Matt died on a Sunday evening at 8:00. I thought I had heard he was coming home from work, but October 14, 1917, fell on a Sunday.

Lucy (Rodgers) Sloan lived as a widow for fifty-three years and one day. Later in life she was with her daughter Lucy "Pete" Henry and her family in the area of East 189th and Harvard. Lucy was my mother's last surviving aunt; I remember her as thin and quiet, sitting next to the window in her daughter's kitchen.

Matt's wife and children are in some of the Rodgers' family photographs on the Ohio Photos page on this site. (Now available by request.)

For a map of the townlands in Kilbroney, see the image at Ros Davies County Down site.