Some people are easy to find, some are hard. Ellen Sloan would have been a lot easier to find if 1) she hadn't said she was the cousin of Minnie Keeves/Caves of Mullahead, County Armagh; 2) she hadn't taken a few years off her age as she got older, and 3) she had shown up on at least one United States census. Just one would have been good enough. But, for better or worse, here is her story. 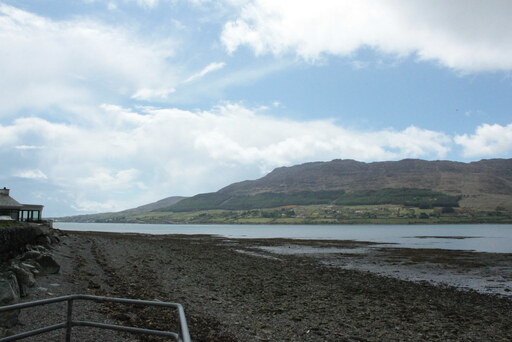 Ellen Maria Sloan was born August 22, 1873, in Ballincurry Townland, Killowen, County Down, and was baptized the same day in Kilbroney Catholic Parish. She is the third known child of James Sloan and Mary Brennan, preceded by her sister Susan and a brother Peter. Following her in the family were Thomas, David, Francis and Matthew.

Ellen was still in Ballincurry in 1894 and 1895 when she was the informant on the death records of her father (July 10, 1894) and her brother Peter (April 17, 1895), but is not with the family in 1901. She may or may not be the Ellen Sloan on the 1901 census who was working as a servant in the household of Oliver Goldsmith, vicar of the Church of Ireland in Greyabbey, County Down.

At any rate, Ellen Sloan left Ireland for America on October 5, 1907, from Londonderry aboard the Columbia. She said she was 30 years old, born in County Armagh, and last resided in County Armagh. She was travelling with Minnie Keeves [Caves] whose father Charles lived in Mullahead, Tandragee, Armagh. Neither had been in the U.S. before. They were both headed to Minnie's sister Frances' home at 536 North 40th Street, Brooklyn. They said their final destination was Philadelphia, but I don't think they ever got that far. They arrived in New York on October 14.

Now, this might not look like our Ellen Sloan, but I am pretty sure that it is, because… 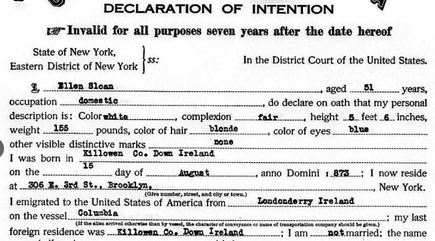 …on February 11, 1925, an Ellen Sloan declared her intention to become a citizen of the United States in the US District Court, Eastern District of New York, Brooklyn. On that occasion, she stated that she had been born in Killowen, County Down, on August 15, 1873, and had arrived on the Columbia on or about October 12, 1907. The dates match closely enough to what we have already seen to say that this is the daughter of James Sloan and Mary Brennan.

When Ellen filed her petition for naturalization on January 25, 1928, in the same court, she got the date of arrival exactly right, October 14, 1907. Both records required a physical description—Ellen was 5'6", 155 pounds, with blonde hair, blue eyes, and a fair complexion. She also stated that her occupation was a food checker. She became a US citizen on June 12, 1928.

Previous to that, Ellen had made a trip back to Ireland. On June 9, 1924, she arrived at Moville, Co. Donegal, on the TSS Tuscania, and was headed to Mayobridge, Newry. On her voyage back to New York she stated that her last residence in Ireland had been her nephew Peter Sloan's home in Mayobridge, County Down. Interestingly, there was a Peter Sloan in Ellen's sister's household in 1901 in Ballincurry who later lived in Mayobridge before moving to Dundalk, Co. Louth. This Peter was likely the person Ellen visited.

On the passenger manifest, Ellen said that she was going to her sister Mary Sloan's home at 306 East 3rd, Brooklyn.

David and Mary Sloan, of Brooklyn

Let's take a brief interlude to consider Ellen Sloan's destination, her "sister" Mary Sloan. Ellen had no sister Mary, and definitely no sister at all born as early as 1859, which is what Mary Sloan's information said. Mary and Ellen may have been relatives in Ireland, or acquaintances. Or Ellen Sloan may have been related to Mary's husband David.

David's wife, Mary Sloan, was also a Sloan by birth, the daughter of James Sloan and Margaret Sloan. She died June 10, 1930, and is buried with her husband. The headstone gave her birth as May 14, 1859. I have a feeling that Mary was also from Killowen or nearby, but I couldn't find her on the Kilbroney or Kilkeel baptism registers, at least as indexed at ancestry.com and findmypast.ie. But Sloan is a common enough name throughout Ireland, so Mary may have been from somewhere else.

Getting back to Ellen Sloan, you will remember that she was headed for 306 East 3rd, Brooklyn, in 1924. She is listed in the 1933 Brooklyn City Directory at that address. But alas, not on the 1930 Census at that address with Mary Sloan, her son, daughter, and granddaughter. Which kept her census slate clean, since I didn't find her in 1910 or 1920, in Brooklyn, Philadelphia, or Cleveland, where her brother Matt had settled.

Ellen Sloan died 22 Oct 1939, in Brooklyn. Her last residence was 306 East 3rd, Brooklyn, her occupation–food checker. The death record gave the names of her parents as James Sloane and Mary Brennan. Interestingly, it also said she was widowed and her husband's name had been John, no last name given. On all her earlier records–the passenger manifests and her naturalization documents–she said she was unmarried. I never found a trace of a marriage.

Ellen is buried in Calvary Cemetery, Brooklyn. There is no listing for her on findagrave.com, so I don't know the plot number or whether there is a stone or not; the cemetery might be willing to provide that information. There was no death notice in the Brooklyn Eagle for the dates October 23 to 25.

So in the end, I am about 99% sure this is the Ellen Sloan born in 1873 in Ballincurry. Which is about all the certainty you can expect from paper records, I guess. It would have been a little better, as I said at the beginning, if she hadn't claimed to be Minnie Keeves' cousin or, for that matter, if her death record hadn't said she was a widow. But in the first case, she may have needed a destination in the United States to be admitted, and may have known Minnie from working as a domestic servant. As far as "widow" on her death certificate goes, that information could only come from her survivors, probably a neighbor, or a relative of Mary Sloan. Although, they did get her parents' names correct. Well, we might just have to end it there…

Sources and details for Ellen Sloan are in the Ohio Families tree on this site.

The picture of Carlingford Lough and Killowen, "IMG_9643" by mary_mac_82, is licensed under Creative Commons license CC BY-NC-ND 2.0 .