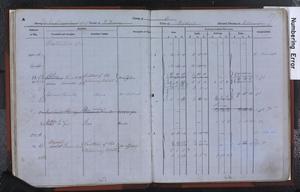 In this, as it turns out rather long, article, we are going to start in 1901 and walk ourselves back through the Ballintur records, looking only at the Rourke families, trying to trace each family back as far as we can. As I read it over again I am reminded of the probably apochryphal words of James Joyce upon finishing Ulysses: "It took me twenty years to write it so it can take them twenty years to figure it out."

On the 1901 census of Ballintur Townland, Kilbroney, County Down, there are three families named Rourke.

Family 1: John and Edward Rourke, uncle and nephew. households 2 and 3. Occupied various parcels of land whose numbers started with 23.

On Griffith's Valuation, taken in 1863 and 1864 in County Down, these three families and their holdings are as follows:

They are joined by two other Rourke households:

John Rourke, son of Terence: 7 acres, 1 rood, 20 perches, as parcels 4A and 4B.
John appears to have died by 1867. His land passed to Stephen Cull and then to Stephen's son Patrick.

Here are the Rourkes and their total holdings in acres, roods, and perches. There were 40 perches in a rood, and 4 roods in an acre. I listed them in the same order as in the book, but there were other families in between.

At this point, I really should look at the Kilbroney Parish records to see who was alive and who wasn't, and how old they were in 1834, but here goes anyway.

I'm almost positive that James Rourke of the Tithe Applotment Book was the father of Edward Rourke listed on Griffith's. That would make him an ancestor of "family 1" found on the 1901 census.

I'm also almost positive that John Rourke Jnr from the Tithe Applotment Book, is the same as John Jr on Griffith's Valuation, putting him in "family 2".

And Felix Rourke also shows up in both the Tithe Applotment Book and on Griffith's. He is an ancestor of "family 3".

Next to consider: Owen and Terence Rourke, who were in both the Tithe Applotment Book and on Griffith's. Neither of their families seem to have lasted much past Griffith's Valuation, or at least not as land tenants in Ballintur. I don't know where they fit in with the others.

Next, John Rourke Sr of the Tithe Applotment Book is not listed in Griffith's Valuation. He might be the John Rourke who died at age 85 in 1857, a few years before Griffith's Valuation. And he may be the father of Michael Rourke, who is on Griffith's in Ballyneddan. Michael was the husband of Alice Cunningham. Both John and Michael were blacksmiths. Michael's son Frank, in Peoria, Illinois, said his grandfather died at age 86. That would make John about 37 when his first child was born, and 50 when his youngest was born.

That leaves William in the Tithe Applotment Books. The given name "William" occurs in Michael Rourke's family in Ballyneddan as well in "family 1" later in the 1800's. But I haven't found it so far in either "family 2" or "family 3". Was William more closely related to John Rourke Sr and to James Rourke than to the other families? It is hard to tell.

And was this William Rourke the husband of Rose Fitzsimmons, the couple that settled in Dubuque, Iowa? According to descendants of that couple, William was from Ballintur. William arrived in the US by June 22, 1847–after the Tithes Applotment Books and before Griffith's Valuation. See William O'Rourke and Rose Fitzsimons at 50webs.com.

The Public Records Office of Northern Ireland says that "Freeholders were men who either owned their land outright or who held it in a lease for the duration of their life, or the lives of other people named in the lease."

On this list we find the following Rourke men, as freeholders in Ballintur, all renting from William Needham, and all recorded in Kilkeel on October 22, 1819:

Because of his given name, I think it is safe to say that Felix Rorke is part of family 3, and is probably the man listed in 1834 by that name.

James Rourke is very likely family 1, and the same James Rourke as in 1834. Note that he is the only one who names a "William" as a man for whose life he his holding the lease. Does this connect William with family 1 again? Is he the same William as on the Tithe Applotment Books?

Francis Rorke is very likely family 2. The given name re-occurs later in that family. But where does he fit in to the land succession on the Ballintur parcels? He is probably a contemporary of John Rourke Senior, and we put John Senior on family 2's parcels, or kind of anyway.

This list and the one from 1819 are both combined and are found at PRONI: Freeholders Records, which says "1793-1829 - Protestants and Catholics with 40 shilling freeholds were allowed to vote."

There are two Rourke men in Ballintur on this list from 1793. Both registered in Newry on 24 October 1793:

This looks to me like the generation before the men listed in 1819. Looking at the Kilbroney Parish Records we find a burial of a Thomas Rourke in 1814, a William in 1816, and another William in 1819 at age 78.

And on the other end of things, the men on the 1819 list might be explained by the Parish Records:
1) A Felix Rourke marries and starts a family in 1821.
2) Likewise for a Francis in 1814.
3) I'm fairly sure that my ancestor, James was born about 1799, obviously too late for the 1793 list, but age 20 in 1819. Could he have been the tenant of record at age 20 if his father was one of the men named William who had just died? Sounds possible. James' first known child was born in 1822.
4) Terence may have married before the marriage records start in 1813.

So, by the time we work backward to the 1793 Freeholders list, have the three families we started with in 1901 merged into only two? If so, then William is likely the progenitor of Family 1 and Thomas of Family 2 and Family 3.

Now is the time to pause and look back at our journey and realize that, for the most part before 1864, we have been walking in 'the mists of time.' Your guess as to how these families fit together is just as good as mine. We've been working without all the other types of records available for the British Isles and American colonies for the same time period: censuses, births, marriages, deaths, wills, and deeds.

So what is our next destination? In my dreams, I am going to the Public Records Office of Northern Ireland in Belfast, which holds the Kilmorey Papers, the records of the landowners for Ballintur and surrounding townlands. Regarding the Papers, the Introduction says:

"Rental material is fairly abundant, although much - particularly for the Newry estate, post-1881 -- has been retained for business purposes. For 1810 and 1811 there are rent ledgers-cum-leasebooks for the entire Irish estates of the 12th Viscount Kilmorey in Cos Armagh, Down and Louth, giving details of leases back to 1731. A later rent ledger of 1813, also covering the entire estate, includes a list of 'Tithes of the Lordship of Kilmorey' -- a term which does not seem to be used elsewhere. There is a good run of Newry rentals, 1820-1881, with a largely uninterrupted blank between 1840 and 1870; and a complete run of Mourne (ie Kilkeel and Greencastle) estate rentals, 1882-1906."

Perhaps there is enough information for Ballintur to identify the Rourke tenants before 1864. I am guessing that Ballintur would fall into the Newry rental section. In actual fact, I will probably take a longer look at the Parish Records and see if I can fit the families together a bit.

I emailed PRONI to ask if the Kilmorey Papers contained the rental books for Ballintur, and the person who replied showed me how to search the collection myself. I clicked on a few links and found out that the rental books for the Mourne Estate were included for 1837, 1838, and then from about 1870 forward. (Ballintur was part of the family's Mourne Estate.) Those years would not tell us anything about the three O'Rourke families that we don't already know. So our walk through the past in Ballintur is going to end in the mist—and I won't be going to Belfast anytime soon.