My sister called my atttention to the fact that our O'Rourke family rented 16 acres of Ballintur in 1864, according to Griffith's Valuation. This was a parcel twice as big as almost everyone else. I decided to take a closer look at the land records.

For a map of Ballintur from the 1840's showing the parcel boundaries see the article The O'Rourke Land in Ballintur, Killowen.

The first thing I noticed while looking at the Revision books, which were updates to Griffith's, was that our parcel was the only one in Ballintur that was ever split, from 1864 to 1919. The land reform laws that were enacted after the Famine of the 1840's kept land from being sub-divided ad infinitum until the parcels were too small to support anyone. So ours must have been considered large enough to split–under the law, or with the law looking the other way.

Then I looked at the larger picture. Ballintur Townland in Kilbroney, County Down, Ireland, was 78.1 acres in area, or more exactly, 78 acres and 18 perches. A perch is a square rod. There are 40 perches to a rood and 4 roods to an acre, according to Wikipedia: Perch (unit). 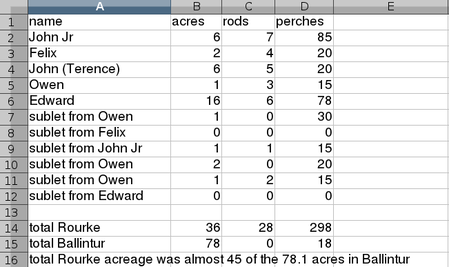 Further back, on the Freeholders' List in 1819, there are only six men in Ballintur. Four of them are Rourkes.

On the Freeholders List in 1793 I only found two men in Ballintur, and both of them were Rourkes.

So as you work your way back in the records, the Rourkes are renting a higher and higher percentage of the acreage in the townland. All of this raises the question, was there a time when the Rourke family rented all of Ballintur? When did they arrive, and from where? Why? I don't know.