In March of 1936, Mr. William McGrath of Butte, Montana, received a letter from Ennis, County Clare, Ireland.The image of the envelope to William McGrath was once on the Jim Forte Postal History site but is no longer. I am not connected with the site. It was addressed to him c/o the Post Office, and there was a stamped note on the envelope that said "Second Notice." What can we learn about Mr McGrath? Was he from County Clare?

Of the two, I decided that the addressee on the envelope—if it was either man—was more likely the second. Living in a boarding house, he would probably have more reason to leave his mail at the post office to be called for.

It looks like William passed away in March of 1955. On the seventh of that month, a copper miner named William McGrath died at the Midway Bar, 118 E Broadway St, Butte, just down the street from the rooming house. He had a history of cardio-vascular problems, but the exact cause of death was unknown. His date and place of birth were June 18, 1890, in Ireland, but where his parents' names should have appeared on the form it just said "no record." William was single when he died. He was buried March 11, 1890, in Holy Cross Cemetery, Butte. The funeral director was F.X. Dolan, of Daly Shea Co., Butte, Montana."Montana, County Births and Deaths, 1840-2004," database with images, FamilySearch (https://familysearch.org/ark:/61903/1:1:QKNR-X7FH : 4 August 2017), William F Mcgrath, 07 Mar 1955; citing Death, Butte, Silver Bow, Montana, United States, various county recorder offices; FHL microfilm 2,312,134. 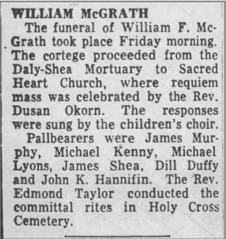 There is contact information on that page, and even more information at Alien Files (A-Files) at the National Archives at Kansas City.

With a lot of help from my friends

At this point, I thought I had done all that I could and I put this article online. A few days later, I thought I would look for a County Clare genealogy group on Facebook. I found the IGP's County Clare Ireland Genealogy Group and posted a short query at https://www.facebook.com/groups/countyclare/permalink/1795320817205701/. Within a couple of hours they found for Mr McGrath 1) the civil registration of his birth, 2) the transcription of his baptism, 3) his 1901 and 1911 censuses with his parents, and 4) his declaration of intention to become a US citizen. Here is a brief summary of what they found:

On September 28, 1939, William Francis McGrath, of Butte, Montana, declared his intention to become a US citizen. He had been born in Ennis, Ireland, on June 18, 1890. The civil registrations for that date record his birth in the Borheen, a section of Ennis, son of James McGrath and Margaret (Penn) McGrath. He was baptized two days later in Ennis Parish. In 1901 he was living in the Borheen, Ennis, with his parents, his father's father, Maurice, and two younger brothers, Michael and James. In 1911, the two younger siblings were not in the household.Irish Civil Registrations at https://civilrecords.irishgenealogy.ie; Ennis Parish baptism transcriptions at http://www.ennisparish.com/genealogy/; the 1901 and 1911 censuses at http://www.census.nationalarchives.ie/search/; and the image of William McGrath's declaration of intention posted at Post at Co Clare Genealogy on Facebook re William McGrath.

So, after a rocky start, we established that William McGrath, the addressee of the envelope, was from County Clare. I suppose there might have been a more direct route from one end of this "puzzle" to the other, but we got there eventually. It might have helped to have access to ancestry.com. Also to have been more familiar with the available Co. Clare resources. And it really would have helped if I had remembered the civil registrations were on line. But I'm a bit out of practice. Thanks again to everyone at the IGP County Clare Ireland Genealogy Group at Facebook. You can find the details here under McGrath.