Having found William McGrath's parents, James McGrath and Margaret Penn, I decided to look for their parents.

In 1901, James McGrath and his father Maurice both said they had been born in County Clare, but in 1911 they said County Tipperary. On the advice of a researcher with the County Clare Facebook group, I looked in Tipperary first, but didn't get far, since I didn't know where in Tipperary to look. So I switched to the Penns.

The civil records of Margaret Penn's marriages to Thomas Keane and James McGrath both said that her father's name was James. I found a couple possible sets of parents for Margaret in Ennis. There are James Penn and Mary Barry, who had a son Pat, born March 7, 1846. And there are James Pinn and Anne Dedy, who had a son John, born August 15, 1853, on Sail Street, Ennis. 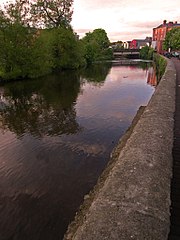 Francis is probably the same person as Frank Pinn who, with his wife Bridget Madigan, had a daughter Eliza on December 12, 1846. One of the sponsors was Mary Pinn—possibly Mary Barry the wife of James above. Bridget apparently died in the 2nd quarter of 1869 at the age of 59. I didn't find a death record for Francis.

Another relative may be Mary Pyne, who with her husband Thaddeus Linnane, had a daughter Agnes, August 18, 1854.

And on Griffith's Valuation of Clare, finished in 1856, there is the household of Hannah Penn on Cloughleagh Road, Cloughleagh, town of Ennis. Hannah apparently died in the 1st quarter of 1867.

All the above were in Ennis, County Clare. I couldn't tell for sure if these individuals were related to Margaret Penn, mother of William McGrath, but since I found them I thought I would gather them here, in case someone else is looking for them and comes across this article.

The image of the Fergus River, Ennis, was found at wikipedia: File:Ennis r-fergus.jpg, and is available for use under the Creative Commons Attribution-Share Alike 2.0 Generic license. The terms of the license are at that link as well.