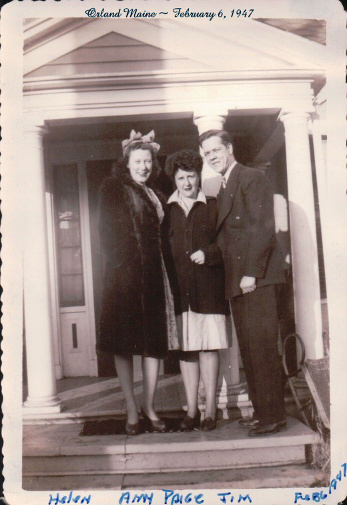 Ann McAlister was born in Bucksport, Maine, Dec 16, 1905, the daughter of Frank and Josephine (Delano) McAlister. In 1910 and 1920 she was living in Bucksport with her parents and her brother, Royce.

Sometime in April of 1930, Ann was married to Augustus "Zeke" Paige, also of Bucksport. They were living with her widowed father and aunt on April 22, 1930, when the census was enumerated. They had one child, a daughter Barbara Ann.

Ann was a painter who began her painting with Frank Hamabe of Blue Hill and later attended Haystack Art School, and the University of Maine. She had showings in Bucksport, Bangor, and elsewhere in Maine.

Ann (McAlister) Paige died January 11, 1984, in Orland, Maine, and is buried in Oak Grove Cemetery, Orland, with her husband.

For more about her husband Zeke and his family see: Augustus "Zeke" Paige, Bucksport, Maine.

Sources for Augustus Paige's information can be found in his individual record in the New England Families tree.