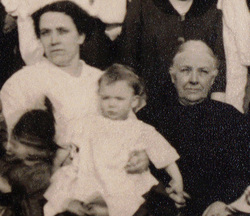 Anna Cunningham was born 3 Oct 1845, possibly in Ballymadeerfy Townland, County Down, Ireland, the daughter of James Cunningham and Catherine Devine. The exact date of her birth comes from her granddaughter Nan (Gallagher) Fleming's research. The year matches all of Anna's censuses, including the 1900 census which said August 1845. I was unable to find a baptism record for Ann in the Kilkeel Parish Records, but they are incomplete.

The Cunninghams were also said to have had seven sons including their youngest child James. On the 1901 Cenusus of Kilkeel there are a Patrick Cunningham (b. 1866) and a James Cunningham (b. 1857) in Ballymadeerfy, who may be Anna's brothers.

One story that came down in the family about Anna was that prior to marrying Ned, she had been engaged to marry a man named Brennan. That man, or his son, went on to become a Catholic bishop in Cleveland. Wikipedia has a list of all past bishops and associate bishops in Cleveland and there is no Brennan. But enough of the Rodgers' oral tradition has proved true for me to say that there must be something to this story. Maybe Mr Brennan or his son became a monsignor in Cleveland, or a bishop elsewhere.

Anna was working as a "sewer" or seamstress when she was married. She was no slouch at the trade. My mother recalled that Anna could 'go downtown and see a dress in the store window. Then she would go inside and buy the material, go home, and make the dress from scratch, without a pattern.' I have a picture of three of Anna's granddaughters making their First Communion together, about 1923. I don't know if Anna was still sewing, but each of the girls is wearing a different style of dress, so someone probably was.

We started this series on the Rodgers by talking about the reliability of the family's oral tradition, including the story that Anna was a dressmaker. So that seems like a good note to end on as well.  I've tried to stitch together their story and retell it as well as I heard it, but something is lost in the written word. I hope you can enliven it in your imagination and that you will pass it on.

For this complete series of articles, see:

Part one: Edward "Ned" Rodgers of Kilkeel and Cleveland