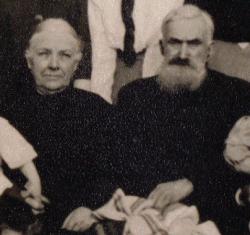 When I started working on the Rodgers' family history I was immediately impressed by two things: 1) the accuracy of the earlier research done by my mother's cousin Nan (Gallagher) Fleming, and 2) the reliability of the oral family tradition in the Rodgers clan. Here is just one example:

Nan Gallagher's information said that Edward "Ned" Rodgers parents were Pat Rodgers and Margaret Quinn. The family said that Ned was from somewhere called "Ballamadurphy" and had been in the British Navy. His wife Anna Cunningham was said to be an excellent seamstress. Was all this true?

A transcription of their marriage record, that at one time appeared at http://stage.bicsystems.com/banbridge, reads:

Unfortunately the transcription is no longer on line, but the original should still be accessible in Ireland. It's possible that Nan (Gallagher) Fleming, librarian that she was, sent for copies of the original records.

Another example: Her research also said that Ned Rodgers had a brother John who stayed in Ireland, and the 1901 Census of Kilkeel provides this as a likely candidate for John. Note the son named Patrick in the household:

Household 5 in Ballymadeerfy Place of Birth

These are just two examples of the reliability of the earlier research and the oral tradition. It was repeated over and over. So I think we can confidently say that Edward "Ned" Rodgers also had a sister Margaret, a brother Hugh, and a brother Will who went to Australia, although I haven't found supporting records for them yet.

For this complete series of articles, see:

Part one: Edward "Ned" Rodgers of Kilkeel and Cleveland