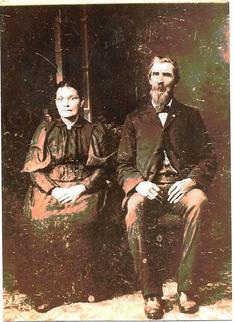 After Benjamin Cowan's divorce from Rosanna Inman, he apparently went back to Salem, Maine, for a while. The 1870-71 Report of the Selectmen of the Town of Hampden says that Hampton had received $351.34 from Salem for support of residents of the town farm. That would have been for Benjamin's children, as explained in part two of this series.

About 1874, Bejamin wedded Sarah Jane Newell, born September 1839, daughter of William and Cordelia Newell. Sarah had been married twice previously, to Thomas Greeley (in 1864) and Silas Trask (possibly in 1869).

Benjamin worked as a logger in Greenville, according to a descendant of his daughter Flora. Then on the 1880 census he was a quarryman in Monson. He is found in Monson on the 1890 Veterans' Schedule and the 1900 Census, by which time he had retired. He died Jan 20, 1903 in Monson; his wife is on the 1910 census as head of the house with her sons Orrin and Alvin.

Sources include:
email from a Cowan descendant
Maine Marriage and Vital Records
The Bryant Family Tree at ancestry.com
US Federal Censuses.