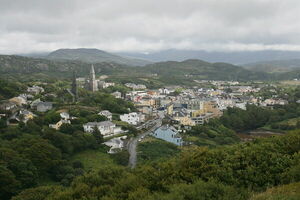 In 1937 Miss Katie Timoney of 654 Lincoln Avenue, San Rafael, California, received a letter from Ballyconneely, County Galway, Ireland. Did this correspondence have anything to do with her family's county of origin in Ireland?The envelope to Kate Timoney was once at the Jim Forte Postal History but has been sold. I am not connected with the site.

On the 1930 Census of San Rafael, I found a Catherine F Timony living with her widowed mother Mary at that address. Catherine was 40 and was born in California. Her mother, age 75, was born in Ireland. Working back through the censuses, in 1900 Kate was with her father Anthony, age 49, and Mary, 49, in San Rafael. Anthony had been born in Ireland as well. It seems that Catherine was Mary and Anthony's only child.

Anthony and Mary Maddock were married on January 18, 1881, in Marin County. In 1910, Mary said she had been married twice, and had four children of whom only two were alive.

Besides this basic information, I found Catherine Timony re-entering the United States on August 3, 1934, aboard the SS President Harding. The passenger manifest said the ship had left Cork on July 27. Had Catherine struck up a friendship in Ireland, and was that person the source of the correspondence? Or was the letter from her mother's family? Or her father's?

At this point I had come to a dead end, so I decided to just Google "anthony timony san rafael" to see what showed up. It turns out that a number of local California papers have been digitized and are on line at the California Digital Newspaper Collection, at the University of California, Riverside, website.

There were a lot of hits for Anthony Timony and his wife, but the one that helped me the most was an obituary for John D'Arcy Connolly, brother of Mrs Anthony Timony. This told me that Mary Timony's maiden name was not Maddock, but Connolly. I also now had someone else to search for, namely John Connolly. As a bonus, he had an unusual middle name.

Googling 'John D'Arcy Connolly' finished it off. He served as the US consul to New Zealand for some time, and there was a big writeup on him in the History of Sonoma County, at GoogleBooks. It began with:

"The subject of this sketch, John D'Arcy Connolly ... was born in 1854 near the town of Clifden, County Galway, Ireland, his father's name being Daniel Connolly and his mother's maiden name Mary D'Arcy."

A few sentences later it mentioned:

Clifden, Galway, is 9.4 km from Ballyconneely, according to Google Maps, so it is probably safe to say that Kate Timony's 1937 letter came from one of her mother's family in Ireland. She might have been visiting them in 1934.

As we said, Mary had been married previously, to Thomas Maddock. On the 1880 census Mary, widowed, is living in San Rafael with her daughter Eleanor, 7, born in New York, and daughter Mary A, 5, born in California. Eleanor is mentioned in a news clipping in 1892, but after that I lost track of her. Mary may be the Mary A Maddock who died in California in 1917, age 44. There is a headstone in the Timony family plot that is just inscribed "Mary."

If Mary (Connolly) Maddock Timony's 1910 Census information is correct, saying that she had 4 children but only 2 were still living, then possibly Eleanor had died before 1910. But I found no record of her death.

I didn't have much more to go on for Anthony Timony's family either, until I found another news clipping at the site I mentioned above. On May 8, 1913, the Marin Journal published a remembrance of Martin Jordan, a cousin of Anthony's, who had died a few days earlier. It said Martin was only 27 when he died and had just arrived in the United States three weeks earlier. I found Martin's obituary, which said he was from County Mayo:

as well as his Ellis Island record a few weeks before his death, as follows:

Martin is in his mother's household in 1901, house 4 in Cartron (Addergoole, Mayo).

There were three Martin Jordans born in Mayo in the mid-1880's, but the only one with a mother Margaret was born June 22, 1886, in Derryhillagh Townland, son of Anthony Jordan, a farmer of Derryhillagh, and Margaret Jordan, formerly Timony.

(I know Martin's obituary said his father's first name started with "M", but those things happen. I think he would know his own mother's first name, which he said was Margaret on his passenger's manifest.)

Working backward, when Margaret Timony married Anthony Jordan on February 19, 1884, in the Catholic Chapel of Lahardane she said she was of Ballyduffy Townland and her father's name was John. Based on that, and on her age on the 1901 and 1911 censuses, this looks like Margaret's baptism record:

May 2, 1857
Addergoole, Diocese of Killala, County of Mayo
Margaret, of John Timony and Cate Lynn. sponsors: Thomas Hoban and Bridget Hoban. [Ballyduffy scratched out] [Cartron added or also scratched out?]

I didn't find a baptism record for Anthony Timony, father of Kate. There are a few Anthonys in the 1840's in Addergoole, including this one:

but his might not have been recorded. If he was Martin's true first cousin, then Margaret's father, John Timony, would have been Anthony's father's brother. But putting all that together just from the parish registers would have been a lot of work. "Suffice it to say" that Anthony Timony is very likely from the area of Addergoole, Mayo, possibly Cartron or Ballyduffy.

I seem to end up with a lot of "orphan" families. Mary and Anthony's only child Kate died single, and Mary and Thomas Maddock's two daughters also seem to have died childless. Maybe there is a relative out there somewhere wondering what happened to Mary Connolly or Anthony Timony.

The photograph of Clifden, Galway, came from the article Clifden at wikipedia.org, and is in the public domain.