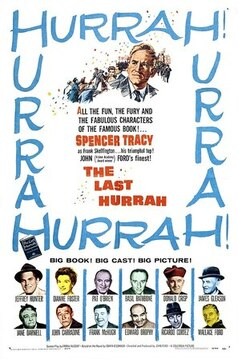 Some years ago I researched a friend's Irish ancestry. She was from Galway and it turned out that she was distantly related to John Ford the American movie director. That got me thinking about the Irish experience in the United States and about American movies in general, which eventually brought me around to reading, not watching, The Last Hurrah, by Edwin O'Connor.

I read the rest of his novels, enjoying them all. Somewhere along the way I learned he was raised near to where I was living at the time. In fact I had driven past his family's house more times than I could count. So I thought I'd see what I could find in the online records for the ancestry of Edwin O'Connor's family.

His biography, A Family of His Own, by Charles Duffy (Washington, D.C.: Catholic University of America Press, ©2003), got me started with exact dates and locations for Edwin's birth and the marriage of his parents, John V. O'Connor and Mary Greene. According to the author's interiews with family members, Mary Greene's mother's family was from County Tipperary. Little was known about the O'Connors or the other branches. That seemed a bit of a shame.

To make a long story short, I was able to trace Edwin O'Connor's ancestry back to the immigrant ancestor in all lines. In most cases this was his great grandparent; in one line it was his gg grandparents. All were Irish.

The County Tipperary connection was the easiest, since their Catholic parish in Ireland—Templemore, Tipperary—was evidently carved on the headstones of John Ryan and Mary Healey. I narrowed them down a bit more to Clonmore, a village in that parish.

Richard Dwyer, John O'Connor's maternal grandfather, said he was from County Waterford when he was naturalized, but I couldn't get more specific than that.

And James Greene, Mary (Greene) O'Connor's father, was very likely from Corrabeagh/Curbeagh Townland, Fenagh Parish, County Leitrim. His naturalization record provided the county, and his marriage record gave his parents names: John Greene and Catherine McQueeney. There is only one couple in Leitrim with those names, and they were of that townland when two of their other children were baptized.

Most of the men in the first two generations in America were laborers except for Richard Dwyer who was a butcher. Two were insurance agents for a while, but one of them went back to being a mill worker. It might be interesting to find out just what constituted an "insurance agent" in northern Rhode Island around the turn of the 20th century that would lend itself to this type of transitioning. And speaking of mill workers, O'Connor's paternal grandmother, Anastasia Dwyer, was working in a cotton mill in Blackstone, Massachusetts, at the age of 14–along with her 12 year old sister.

Page 7 of A Family of His Own said that Edwin O'Connor's parents were "of a generation which seldom looked back to the 'old sod,' and which in fact often looked down on anyone playing the professional Irishman. The family took little interest in genealogical searches."

I guess that makes me a professional Irishman who takes an interest in genealogical searches. There really ought to be one in every family. Details and sources that went into the research are available here.

Finally, this article was not meant to be a history of the O'Connors and how they fit into their times. For that, read A Family of His Own, then find a history of Blackstone, Massachusetts, especially during the mill era, and one of Woonsocket, Rhode Island.

Wikipedia provided the image of the movie poster and says it is in the public domain, since the copyright was not renewed.