This website includes a picture of the 1922 second grade class at Holy Name Parish on Broadway on the southeast side of Cleveland. My mother was in that class and identified most of the children in the picture. She identified the young lady on our far right in the back row as Eileen Quinn. There was a Eileen Quinn living in the area, described below, who is probably her.

Eileen Quinn was born August 10, 1913, in Cleveland, the first child of John Joseph Quinn and Agnes May Francis.Her exact date of birth comes from her father's Petition for Naturalization, but he was a bit off on two of the other children's dates, at least according to their Social Security information. They had married on August 17, 1912. Eileen was followed by four more children: John "Jack" born 1914, William (1917), Kathleen (1918), and Allan (1921). William died in 1918, but the other children lived to adulthood. In 1930, the family was living at 7808 Goodman Avenue on the southeast side of Cleveland.

On May 9, 1938, Eileen married Reginald G James in Cuyahoga County, and the two were living in Garfield Heights in 1940. Reginald died May 30, 1992. Eileen survived her siblings, including Allan who died in 2006. At that time she was living in Raleigh, North Carolina. I don't know when she died or if she and Reginald had any children.

Agnes was born in the second quarter of 1884, in Mitcham, London, England, the daughter of William Francis and Mary Matilda Mihill. The Kevin Fairley Family Tree at ancestry.com provided Agnes' ancestry back two generations to William Francis and Mary Jane Mead on her father's side, and William Mihill and Mary Giles on her mother's. There is no point in my rehashing it here.

Agnes arrived in the United States June 23, 1912, aboard the SS Campania, which had left Liverpool 8 days earlier. She listed her father's residence as 174 High Street, Tooting, London. Interestingly she said her destination in America was her friend, J Quinn, at the Cleveland State Hospital, in Newburgh. This was one of many hints I needed to trace John's movements before his arrival in Newburgh back to his homestead in Ireland.

In October 1919 Agnes made a trip back to England with her three children, evidently to visit her parents. She was accompanied by her brother in law, Patrick Quinn, 36, a watchman. She and the children returned to Cleveland in June 1920. I didn't find any more mention of Patrick in Cleveland, so he must have remained in England. The Fairley tree says he died in Putney, which was near Tooting, London.

My effort at researching John Quinn's ancestry was a good example of starting at both ends and working toward the middle, a strategy that doesn't usually work. The Fairley tree gave me his mother's maiden name, Bridget Fair, early in my research, and John's death record in Cleveland, on December 27, 1945, provided his father's name, Michael. 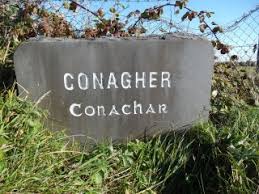 "Fair" is an unusual Irish name, so I figured I'd just throw the parents' names into a search engine and see what came out. I turned up five children of the couple, including a John and a Patrick, all born in Conagher Townland, Dunmore Civil Parish, Galway. This turned out to be the right family, but the only trouble was that their son John's date of birth was February 28, 1878. On all but one of his American records, including his naturalization papers, John Joseph Quinn insisted that he was born in 1883.

Fortunately for the genealogist, John gave the date February 28, 1878, when registering for the United States WWI Draft. And when he and Patrick arrived in Montreal September 3, 1911, en route to Cleveland, they said their closest relative in Ireland was their father Michael in Conagher. Although, from what I can tell, I think they meant "brother", or maybe they were misunderstood. At any rate on Patrick's first trip to the US, when leaving Queenstown on August 28, 1907, he said his mother Bridget Quinn was in Conagher, Tuam.

Agnes Francis' immigration destination, "a friend J Quinn, Cleveland State Hospital" made me realize they knew each other before she arrived. I looked for John in that area of London and found an Electoral Roll of Tooting Ward that included

John, as mentioned, worked at the asylum in Cleveland until about 1917, so this listing seems to fit.

John's parents, Michael Quinn and Bridget Fair, were married in Kilcommon and Robeen Parish, County Mayo, on February 4, 1869, which probably explains why the Fairley Family tree says that the family was from Mayo.

The indexed information to the civil registration of the marriage, in Ballinrobe Registration District, says Bridget's father's name was John. The image is not yet online, but the certificate if obtained should list Bridget's townland at the time of her marriage. This would help identify which of the two John Fairs in the area was her father.

It must be a while since I looked at this family. The image of the civil registration of the marriage is now online:

That would make the John Fair of Bushfield Townland, County Mayo, Bridget's likely father. And it shows that the family was from Mayo. Funny how the mother's ancestry often determines "where they were from" in Irish culture, at least from my experience.

Sources and more details on the families covered in this article are in the Ohio Families section of this site. If you are descended from Eileen Quinn, you are welcome to download the picture of the 1922 second grade class, or contact me for a larger version which might have better resolution.

The image of the townland sign for Conagher, Galway, is used courtesy of the Milltown Heritage Group.