A Few Sloans from Killowen and Rostrevor

While following up the article, Ellen Sloan, Killowen to Brooklyn, I found a few more Sloan families who probably trace back to Killowen, County Down, Ireland. 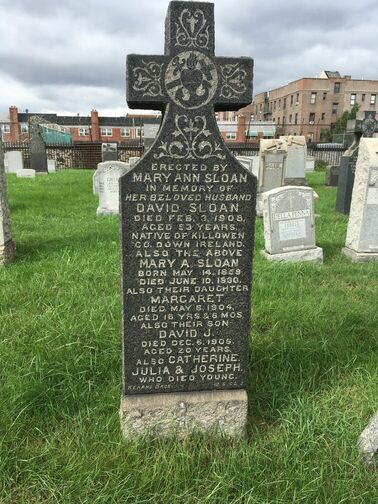 In that article, I mentioned David Sloan, son of David and Julia (Feran) Sloan, and a native of Killowen, who lived in Brooklyn, New York. David's wife, Mary Ann, was also a Sloan by birth. At the time, I thought Mary Ann was born in Ireland, since some of her records said so. But other records said England, including those for the birth of two of her children, where you would assume Mary Ann herself provided the information. Her death record said her parents were James Sloan and Margaret Sloan.

As it turns out, I am pretty sure that Mary Ann was baptized May 29, 1859, in St Patrick's Church, Liverpool, England. The parents' names on that record agree with her death record in Brooklyn, and the civil record also said her mother's maiden name was Sloan.

However, I wouldn't have looked there for Mary Ann Sloan, if I hadn't first found her brother ...

(Note: His death record names those parents, but said James was born May 6, 1861, in Liverpool. I think this is close enough, since there were no other James Sloans in Liverpool with those parents' names. Also not everyone born in the 1800's remembered their exact birth date.)

James Patrick spent much of his early life at sea, dating his immigration into the United States at 1887. He was naturalized in 1896, and married Ellen Theresa Prunty, in Charleston, South Carolina, on November 30, 1902. Ellen was born in South Carolina to parents born in Ireland. James worked for the Clyde-Mallory Steamship Company in their shipyard. He died February 28, 1946, in Charleston. He and Ellen had no children.

But, I wouldn't have found James unless ...

... a Sloan descendant, now living in Co. Fermanagh, hadn't shared some information with me. Her grandfather was Thomas "Gunner" Sloan born in Ballincurry but later of Rostrevor. Thomas was the brother of Ellen Sloan, mentioned at the beginning of this article. Among Thomas' mementoes was a prayer book with memory cards for James P and Ellen T Sloan, of Charleston, and Alicia (Sloan) Baker, daughter of Mary Ann Sloan, of Brooklyn.

Now I knew that the same Sloan family in Rostrevor knew both these families in separate parts of the United States. That is what helped me connect James Patrick with Mary Ann, and then find their family in Liverpool, including the parents ...

James and Margaret Sloan were married July 9, 1854, at St. Nicholas Church, in Liverpool. They were living on Surrey Street, Liverpool, at the time. It was the first marriage for both of them. The witnesses were William Sloan and Margaret Sloane of Greenland Street.

I found baptism records for six of their children, as already mentioned. And I am pretty sure they were living at 2 Court, Bell Street, Toxteth Park, Liverpool, in 1861, if Mary Ann was mistakenly recorded as "Margaret". James was a ship's carpenter, which might help explain why his son James went to sea. I didn't find them on earlier or later censuses, and the names are too common to be sure of their sons' information later on.

So if the family is living in Liverpool, what does all this have to do with Killowen or Rostrevor, you may ask. This: James and Margaret's marriage record named both sets of parents. James' parents were Patrick Sloan and Mary Fegan. Margaret's were James Sloan and Elizabeth Fitzpatrick.

1854 Marriage of James and Margaret Sloan

Now those names might occur together in more than one locality in Ireland, but I know they are definitely South Down names. Putting that together with the clues from the memory cards, I think we can safely say that both sides of this family were from the Killowen/Rostrevor area. Unfortunately, I never figured out how closely they were related to Thomas "Gunner" Sloan, of Rostrevor.

So the road ends there. The parents would have been born about 1800 or so, and there are not enough hours in the day or days left in my life to start sorting out the Sloans and Fegans on the Kilbroney parish baptism records. So we will have to be satisfied with what we have. Perhaps a descendant of one of the other sons will turn up and clarify matters. For now, we can be happy that we have tied a few loose American ends together, and traced the families back to their origin.

The sources and details for all people mentioned are in the Ohio Families tree on this site.

The photograph of David Sloan's headstone is on his page, David Sloan, at findagrave.com.