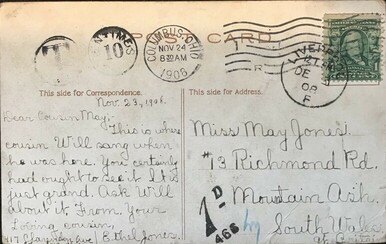 On November 23, 1908, Ethel Jones of Columbus, Ohio, sent a postcard to her cousin May Jones in Mountain Ash, South Wales. The message reads:

November 23, 1908
Dear Cousin May:-
This is where cousin Will sang when he was here. You certainly had ought to see it. It is just grand. Ask Will about it. From your loving cousin,
Ethel Jones
417 Clarendon Ave

Can the postcard help us narrow down the Welsh ancestry of the Columbus family?

To make a long story short, yes, the postcard did help me find the Joneses' ancestry in Wales. I hadn't done much research in Wales, and I took this postcard from a Jones family as a challenge. I don't think I ever would have found their family without the clues on the card. Let's start in Ohio …

Ethel May Jones was born April 30, 1890, in Columbus, the daughter of Thomas Stephen Jones and Marietta Boswell. She was the second of six children, who survived to adulthood. Ethel's oldest brother Raymond was born in 1888; her younger siblings were Clara (1892), Harland (1898), Etta May (1900) and Thomas Stephen (1902). The family was living at either 289 South 18th or 2120 Sullivant Ave, Columbus, in November 1908 when the postcard was sent. Ethel's father was working as a meat cutter.

Thomas Stephen Jones' died in Columbus on January 22, 1932, and his death record said he was born November 21, 1860, in North Wales, the son of Edward Jones and Martha Paugh. Thomas's wife Marietta provided the information and, as it turned out, she hadn't remembered Thomas' parents' first names correctly. But the key clue was his mother's maiden name, Paugh, or Pugh.

That was a start toward his Welsh origin, but I needed more if I was going to connect these families. I looked for the recipient of the postcard, May Jones, in Mountain Ash, Wales, but there were too many to focus on just one. So what next?

What made the difference were the clues on the postcard. The front was a picture of the Franklin County Memorial Hall in Columbus, and the message said "This is where cousin Will sang when he was here." 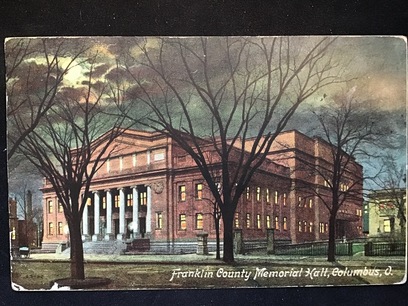 So I tried Googling a few things and eventually, by looking for "will jones welsh singer columbus ohio 1908", I found this:

Tomorrow (Friday) evening the Cambrian Club will present the Welsh singers, known as the Mountain Ash Chorus, the concert to take place in Memorial Hall. There are a large number of native Welsh people in Columbus who with many others will give this choir of singers a warm welcome.The Musical Courier, No. 1496, November 25, 1908, page 39, New York, NY at Google Books.

Since Ethel May Jones sent the postcard to her cousin on November 23, this event must have been the one at Memorial Hall in which her cousin Will performed.

Then a light bulb went off in my head and I realized that if Will was in Columbus he had to get there from Wales. So I went looking for passenger manifests and found this one:

There were 24 men on the same page in the group travelling with William. A note for all of them said they were on a 4 months tour.

With an address in Mountain Ash, it was easy to find the correct Welsh family, namely …

… that of Edward and Mary (Davies) Jones, at 13 Richmond Street, Mountain Ash. In their household in 1911 we find William Spoonley Jones, age 30, the singer, with a sister Lilian May, age 21, the recipient of the postcard. Also in the household were a younger brother Stephen, and two younger sisters Bronwen and Ceinwen. Two sons, Albert and Thomas, had left the household.1911 Census of Mountain Ash, Pontypridd, Glamorganshire, Wales.

William Spoonley Jones and both his parents had been born in Llanidloes, Montgomery, Wales, so the next steps were to find:

For both Edward and Thomas, the mother's maiden name was Pugh. A Thomas Jones and Ann Pugh were married in Newtown in the 2nd quarter of 1858. 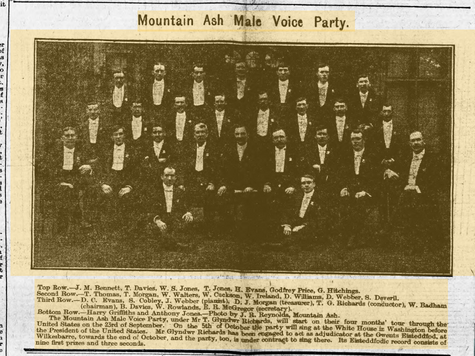 William Spoonley Jones is in the back row, the third person from our left.

Sources and details for both Jones families can be found in the Jones section of the Ohio Families tree on this site.