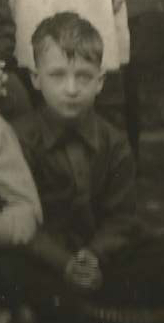 This website includes a picture of the 1922 second grade class at Holy Name Parish on Broadway on the southeast side of Cleveland. My mother was in that class and identified most of the children in the picture. She identified the last young man on the right in the front row as George Welling. There was a George Welling living in the area, described below, who is probably him.

George W Welling was born in Cleveland on April 20,1914, the son of William M Welling and Catherine Farron. The family was living at 13124 Harvard in 1920, in the same home as Catherine's widowed mother Sarah. Beside George, the family included his sisters Catherine and Sarah and a brother Thomas.1, 2

Catherine (Farron) Welling died November 23, 1920 of tuberculosis, and the family, including the Sarah Farron household, moved to 7512 Claasen. They were at that address in 1922. George's father William died in 1925, also of tuberculosis, and in 1930 the children were living with their grandmother and her son at 7915 Harvard.3, 4, 5

George Welling married Coletta Gallagher on February 4, 1933, in Cuyahoga County and raised a family of at least four children. Coletta died in 1972 and is buried in All Saints Cemetery, Brookpark. George Welling died June 1, 1996, in Portage County.6, 7, 1

George Welling's mother Catherine Farron was the daughter of Michael and Sarah Farron. She and her parents were born in Rostrevor, County Down. For more on their family see the article Peter, Michael, and Henry Fearon, Kilbroney to Cleveland.

If you are a relative or descendant of George Welling you are welcome to download the class picture and pass it on. If you would like a larger image, with possibly better resolution, contact me.