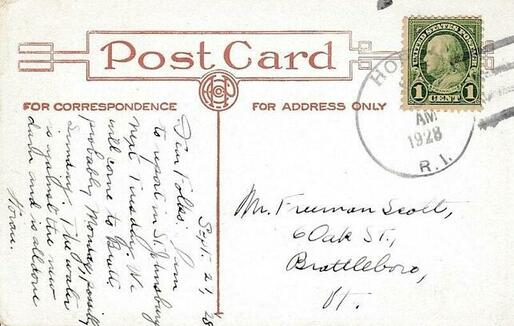 Dear Folks:
I'm to report in St Johnsbury next Tuesday. We will come to Bratt. probably Monday, possibly Sunday. The water is against the new dam and is all done.
Horace

What brought Horace to Hope, Rhode Island? Can we learn a little more about him and his family?

What first caught my attention about this card was the sentence "The water is against the new dam and is all done." Why would anyone mention that to their family on a postcard? As it turns out, Horace most likely worked on the construction of the Hope Dam, which is on the Pawtuxet River in Scituate, RI. (Hope Village is a part of Scituate.) But let's start at the beginning.

Horace Scott was born April 15, 1885, in Brattleboro, Vermont, the son of Freeman Scott and Lizzie Ann Adams. In 1900 the family was at 34 High Street, Brattleboro, and Freeman was working as a grocer. In the household were also Freeman and Lizzie's other two children, Minnie Ann, born 1878, and Arthur Wayne, born 1883. By 1926 Freeman, Lizzie, and Minnie Scott were at 6 Oak Street, the address on the postcard. Freeman died there May 20, 1934, as did Lizzie on October 8, 1945. They are buried in Morningside Cemetery, Brattleboro.

Horace graduated from Rensselaer Polytechnical Institute in 1909,Google Books, Bulletin, Catalogue, Rensselaer Polytechnic Institute, 1919, p. 254. and soon found work with the United States Reclamation Service in Montana, staying with them until the mid-1920's. He was involved with a number of waterway projects in Montana, including the Milk River Project and St. Mary's Canal. Two collections of his notes and correspondence while on these projects exist, one at the Montana Historical Society Research Center Archives, Helena, Montana, and one at Yale University.See Horace L. Scott Papers, 1910-1924, at Archives West, and Horace L. Scott papers, at Archives at Yale.

Mr Scott then returned to Vermont and married Edith Marion Knight in Brattleboro on February 7, 1925. From his addresses in the records, it seems like he worked on a job in Bellows Falls before going to Rhode Island for the Hope Dam project. He was back in St. Johnsbury, Vermont, in 1930 and 1931, then in Brattleboro again from 1936 to 1939. From 1939 onward he worked for the state of Vermont, serving on the state planning board and the Water Conservation Board, and was retired by 1960. Horace died in Middlesex, Vermont, on February 3, 1970. His wife Marion had preceded him in death, dying December 6, 1954, in Burlington. Their ashes are buried in Morningside Cemetery, Brattleboro.

Horace and Marion Scott had one child, a son Arthur Horace Scott, born May 13, 1927, in Bellows Falls. In the 1951 Montpelier City Directory he was listed as being employed in Chelsea, Vermont, and his death record (February 7, 1988, Burlington) says that he was a teacher. There is a

A good history of the Hope Dam in Scituate, Rhode Island, from its first incarnation in 1765 onward, can be found on pages 27 to 29 of a .pdf file at the State of Rhode Island Historical Preservation and Heritage Commission website.In a US Department of the Interior registration application for the National Register of Historic Places, Hope Village Historic District, filed and approved in 1995. It says that the present dam was built over the original and mentions a 1928 plan for the dam, which lines up with the date on Horace Scott's postcard. 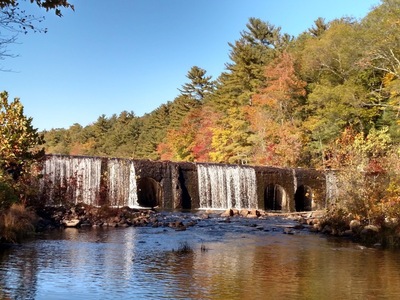 Horace's mother, Lizzie Adams, was born September 23, 1858, in Marlboro, Vermont, the daughter of Henry Adams and Lucy Ann Winchester. She is said to be a eighth generation descendant of Robert Adams, born 1602 in England, who arrived in Ipswich, Massachusetts, in 1635.Google Books, A Genealogical History of Robert Adams, of Newbury, Mass., and his Descendants, 1635-1900, by Andrew Napoleon Adams (Rutland, Vermont: The Tuttle Co., printers, 1900), page 500. I traced the Winchester line back to the American Revolution using a tree at ancestry.com, that looked reliable.

Horace's father, Freeman Scott was born May 24, 1854, West Halifax, Vermont, ths son of Martin Scott and Fanny Hinsdale Larrabee, both of whom were born in Halifax. Martin, 26, is head of a household on the 1850 Census of Halifax that includes a Clarissa Scott, 65. Findagrave.com says Clarissa's maiden name was Smith and her husband was James Scott (1782-May 27, 1850). Both of these families have been traced back quite a way as well. You can start with Fanny Larrabee at familysearch.org.

So Horace Leslie Scott came from a long line of New Englanders. Unfortunately his parents' line has died out, since Horace's brother and sister never married, nor did Horace and Marion's only son Arthur. But Horace has left a lasting mark on New England anyway, through his work on water projects in Vermont as well as the Hope Dam in Hope Village, Scituate, Rhode Island.

The picture of Hope Dam, Scituate, Rhode Island, came from Oceanstategirl Photos and Books and is used with the permission of the photographer.