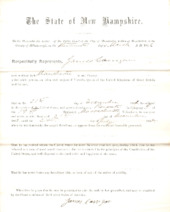 Earlier this week I received a photocopy of the naturalization papers for a James Carrigan, naturalized in Manchester Police Court, Manchester, New Hampshire, on March 13, 1866. He wasn’t our James Carrigan, my wife’s great, great grandfather, as I had hoped. But he was someone’s James Carrigan, so rather than let the work go to waste, I thought I would put it here.

According to his papers, James had served in the 19th Regiment of the Massachusetts Volunteers during the American Civil War. He listed a term from December 31, 1863, until July 24, 1865, but he had actually served earlier as well.

The 19th Volunteer Regiment was organized in Lynnfield, Massachusetts. The roster of the Regiment shows that James Carrigan enlisted on July 21, 1861, at the age of 35 then reentered on December 21, 1863. He was wounded July 3, 1863, (at Gettysburg, from what I can tell), and again on June 3, 1864, (likely at the Battle of Cold Harbor). At some point he was assigned to the Veteran Reserve Corps, an arrangement for officers and enlisted men who were either unable to serve in the line of duty because of wounds or disease, or were honorably discharged because of wounds or disease and wanted to reenter the service. He was discharged on July 24, 1865.History of the Nineteenth Regiment, Massachusetts Volunteer Infantry, 1861-1865, Salem Press, 1906, digitized at Google Books.
19th Regiment Massachusetts Volunteer Infantry, article at wikipedia.org.
Veteran Reserve Corps (VRC), 1863-1865, National Archives and Records Administration at archives.gov.

Since the military unit was formed in Lynnfield, MA, this might be James Carrigan and family in 1860 in nearby Salem:

On his page at findagrave.com, there is a photo of his headstone in Saint Mary’s Cemetery, Salem: 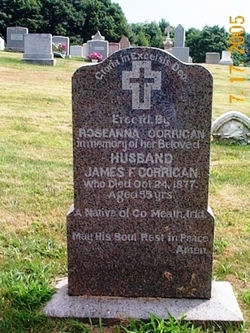 At least I think it is his, despite it being carved “Corrigan.” The date of death matches exactly. It says James was a native of County Meath, Ireland.

There was a Scanlin/Scanlon family in the Carrigan household in 1860, so I wondered if Rose’s maiden name was Scanlon. But not so. The death record of her son Lawrence in Salem on August 25, 1855, said his mother was Rosanna Mcardle. Lawrence died of a fractured skull, and was single at the time.Massachusetts Deaths, 1841-1915, Lawrence F. Corrigan, 25 Aug 1883; citing Salem, Massachusetts, v 346 p 294, State Archives, Boston; FHL microfilm 960,224, at familysearch.org.

Like his brother Lawrence, James Carrigan also died at age 27—on April 8, 1889 in Haverhill, Massachusetts. James had married Katie F Carey in Haverhill on January 8, 1884. She and their 14 year old son Lawrence are living with her brother James in Haverhill in 1900.

Daughter Rose married first to Edward Irvine Brassey in Lynn, Massachusetts on May 9, 1887, then to Thomas Mcdermott, September 7, 1895, also in Lynn. Mary died April 24, 1902, widowed, in Lynn, at age 39, childless as best as I can tell.Sources for the children’s information are the Federal Censuses, and the Massachusetts marriage and death records.

I didn’t find anything on the Miles Carrigan who is listed right after James on the roster of the 19th Regiment. Not in Salem, Manchester, or anywhere.

And if anyone knows where this family is on the 1870 Census, or where my wife’s James Carrigan is in 1870, would you please let me know?