Joseph Drummond, of Montreal, and the Irish Famine 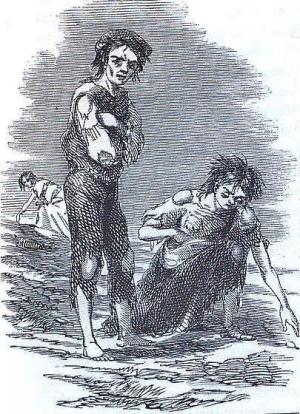 At first glance it might seem strange to talk about Joseph Drummond and the Irish famine in the same article. After all, Joseph and his first wife, Judith Shea, were in Montreal, Canada, by 1844. Joseph is identified as a "gentleman" and a "man with a knowledge of commerce" on some of the parish records in Montreal. He could sign his own name, while many of the witnesses on those records could not. It is unlikely that even in Ireland Joseph had been a peasant farmer, dependent on the potato crop to survive.

A closer look at the records, however, tells more of the story. Joseph does seem to have been a victim, indirectly, of the Irish famine.

When the potato crop failed in Ireland, the people tried desperately to stay on the land, even selling their cash crops like wheat and and barley to pay the rent, rather than use them as food. By the time the mass exodus began, many had contracted typhus, and took it with them when they left. Those who didn't die in passage or on arrival came ashore either sick or contagious. Disease knows no boundaries, so when thousands of refugees arrived in Montreal the plague spread. (From Chapter 11 of The Great Hunger by Cecil Woodham-Smith.)

Now for the records:

Although the burial records of the Montreal churches do not list the cause of death, it doesn't take too much imagination to conclude that some of these deaths were famine and typhus related. Conditions among the poor of Montreal must have worsened considerably with the influx of so many immigrants, many weak and sick.
Another thing to consider is the fact that from 1847 onward Joseph Drummond is no longer described as a gentleman or 'man of commerce' but as a day worker. From the deaths in his family to the change in his economic status, Joseph Drummond, thousands of miles from Ireland, had been affected by the famine.

The image is Skibbereen by James Mahony, 1847, from Wikipedia