Joseph Whalen of Lockport and Cleveland 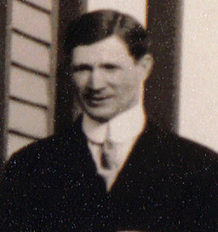 To a genealogist, siblings are your friends, as illustrated by the case of Catherine Rodgers' husband Joe Whalen. His death notice on February 5, 1968 said that he was survived by a brother Fenton. It was through Fenton that I found Joe Whalen's ancestry.

Of course it helped that when Joe married Catherine Rodgers on June 29, 1912, he mentioned that his parents were Joseph Whalen and Catherine Delaney, and that he was born in Lockport, New York. But there is not much trace of Joe in Lockport, only the 1892 State Census with his parents and family, as shown here:

Fenton Whalen, age 2, proved to be the key to the family. He showed up on other records with his family, including a World War I draft registration where it says his occupation was "baseball player."

I had never heard of the name Fenton before, so I assumed it was a name that had been passed down in the family. It turns out that Joe and Fenton's grandfather was named Fenton also. He is seen here in 1870 with sons John, Joseph and, you guessed it, another Fenton:

This is probably getting confusing, so here is a tree from the first Fenton down to the Joe Whalen who married Catherine Rodgers:

Did you notice that in 1870 the information said that the first two children were born in Canada? Sure enough, I found a marriage record for Fenton Whalen and Jane Hughes in Gore Roman Catholic Mission, Peel County, Ontario, on September 2, 1844. There was also a birth record for a son Martin who died before 1870. Peel County is now part of York County and was near Toronto.

While I was waiting to hear from the Lockport, New York, library I thought I would put "Fenton Whalen" into a search for records in all of Ireland. On Griffith's Valuation of Ireland, taken about 1850, there were only two Fenton Whelans in the whole country, and both of them were in Ballyadams Civil Parish, Co. Laois.

Of course neither could be the same Fenton who was in Canada at the time, but there is a very good chance that they are relatives who were named after the same common ancestor. So for now, the most likely county of origin for the Whalen family is Co. Laois. It will be difficult to prove, however, unless there is a mention of a birthplace in one of the American records.

The moral of the story: you may be stuck with your family, but if you are interested in your ancestry then "siblings are your friends."

You can find more information about the Whalens in the Ohio Families section of this website.