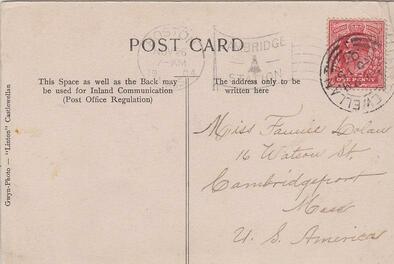 On November 26, 1904, Miss Fannie Dolan of 16 Watson Street, Cambridgeport, Massachusetts, received a postcard. It had been mailed 11 days earlier from Castlewellan, County Down, Ireland, and carried the message

Mary Francis Dolan was born April 20, 1883, in Roslindale, Massachusetts, the daughter of John H Dolan and Mary A Noonan. I will refer to her as Frances, since she seemed to go by her second given name throughout her life.

In 1910, John Dolan's household at 16 Watson Street, Cambridge, included his wife, his daughters Mary Frances ("Fannie"), Elizabeth, and Rosalie, and his mother-in-law Ellen Noonan. His son Edward, born 1881, had married Alice Duffy in 1903 and was living a few blocks away on Pearl Street. Edward's marriage record indicates that the family was on Watson Street when he married.

So with all those Irish names, does the postcard tell us anything about the Irish origins of Frances' family? No, not really, as it turns out. Unlike the other in this series of articles, it is really a tourist type item, and carried no meaningful text. But my curiosity was piqued, so here goes.

John Dolan was born October 19, 1854, in West Roxbury, Massachusetts, son of John Dolan and Bridget Dillon. They had at least two earlier children, Mary Ellen (1851), who died the following year, and William Henry (1853-1888). With that start, I thought I might get somewhere, but I was soon lost in the sea of Dolans in the Boston area. West Roxbury was a separate town at the time but even there, if I am not mistaken, there was another John and Bridget Dolan couple. So the Dolans were a dead end. 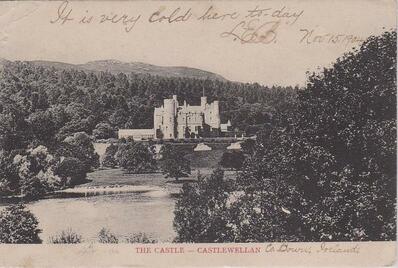 I got farther with the Noonans. Frances Dolan's mother, Mary Ann Noonan, was born January 1858, in Lowell, Massachusetts, the daughter of Dennis Noonan and Ellen O'Brien. In turn, Dennis was born about 1829 in Ireland, the son of John Noonan and Ellen Murphy. John, Ellen, and sons Dennis, Robert, and John were all in Lowell in the 1850s and 1860s.

Dennis' brother Robert proved to be the key to success for this family. His naturalization papers in US District Court, Boston, said that he was born in County Tipperary "on or about" May 3, 1835. I didn't find Dennis or Robert, but there was a John Noonan, son of John Noonan and Ellen Murphy, baptized 7 April 1833 in Galbally and Aherlow parish, Co. Tipperary. This was a couple years earlier than John's American records say he was born, but it is a possible match.

Tipperary was loaded with Noonans and Ireland is loaded with Murphys, so this might not be the right couple, but at least we found a county.

The 1865 household of Dennis Noonan in Lowell also included his father in law, Patrick O'Brien. Patrick was married to Ellen Connors. Ellen's death record, Lowell, 1859, said she was the daughter of John Connors and Catherine "Manesse". The name Manesse didn't show up at all on John Grenham's surname search site. I don't know what name was meant, and that was the end of the line for the O'Briens anyway.

Compared to the other postal covers I have researched, I would say that I came in below average on this one. Once again, the famine immigrant generation proved difficult.

All of the sources I used are available at either familysearch or ancestry.com. They include federal and state censuses, Massachusetts vital records, city directories of Boston and Lowell, and Robert Noonan's naturalization record.

I have uploaded a brief tree of the families mentioned in this article. You can find it here.