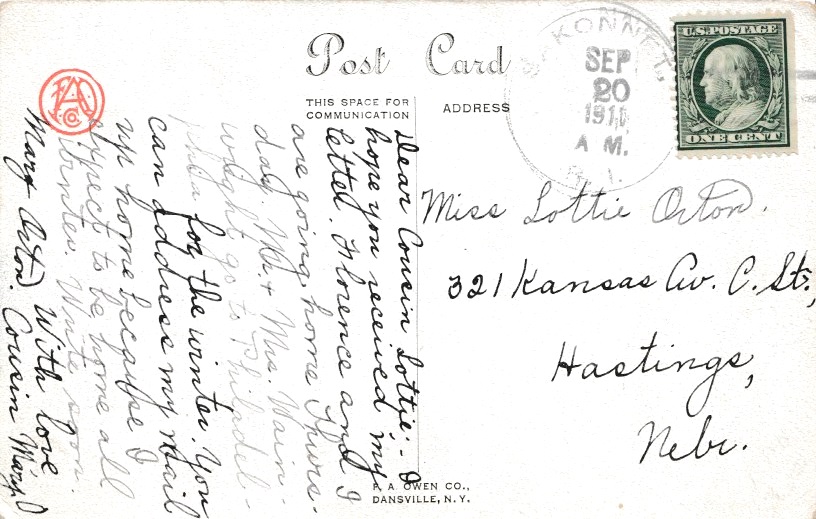 Dear Cousin Lottie;-
I hope you received my letter. Florence and I are going home Thursday. Mr. + Mrs. Wainwright go to Philadelphia for the winter. You can address my mail up home because I expect to be home all winter. Write soon.
With love, Cousin Mary O
Mary Orton

This post card is an excellent example of how postal covers and letters can be helpful in genealogical research. Mary Orton called Lottie Orton her "cousin", not just once, but twice. That's pretty strong evidence that their fathers are brothers, wouldn't you say? Let's see if this conclusion is borne out by the documents we find. What can we learn about these two young women and their families?

The Ortons of Fall River, Massachusetts

Mary V Orton was born September 1893, in Fall River, Massachusetts, one of eleven known children of George E Orton and Clarissa Chace Brown. Her sister Florence was born in November 9, 1892. They were both evidently working in Sakonnet for the summer, since Mary says she would be "up home" all winter.

In 1910, Mary and Florence can be found at 284 Meridian Street, Fall River, Massachusetts, with their parents and family. Their father had been born in England, allegedly about 1854, and their mother in 1861 in Rhode Island. I say "allegedly" because further digging into George's records turned up his Petition for Naturalization to become a United States citizen, which he submitted on October 10, 1883. On that he said he was born in Shelton, England, on or about 17 November 1845. His death record (November 30, 1910, Fall River) added his parents' names: Edward Orton and Diana Wesley.

"Shelton" turned out to be Shilton Parish, Warwickshire, where we find George on the 1851 Census of Shilton Village in the household of Edward and Dinah Orton. There is an index reference to a birth of a George Orton in Foleshill registration district in the fourth quarter of 1844. There were a lot of Ortons in the area, but I am pretty sure this is "our" George.

Mary's mother, Clarissa Chace Brown, was born June 9, 1861, the daughter of Otis Lake Brown and Caroline Chace Wilbor. You just have to love those old New England families who use a family surname as a second given name. I was really tempted to get sidetracked into the Lake, Brown, Chace, and Wilbor families of Little Compton and the area—they had all been there a long time. If you want to take a look at them for yourself, you can start with this tree at familysearch.org: Clarissa Chace Brown. I didn't verify that research, but it looked ok at a quick glance. Or see Clarissa Chace Brown in Google Books' preview of Little Compton Families, Genealogical Publishing Company, 1967. 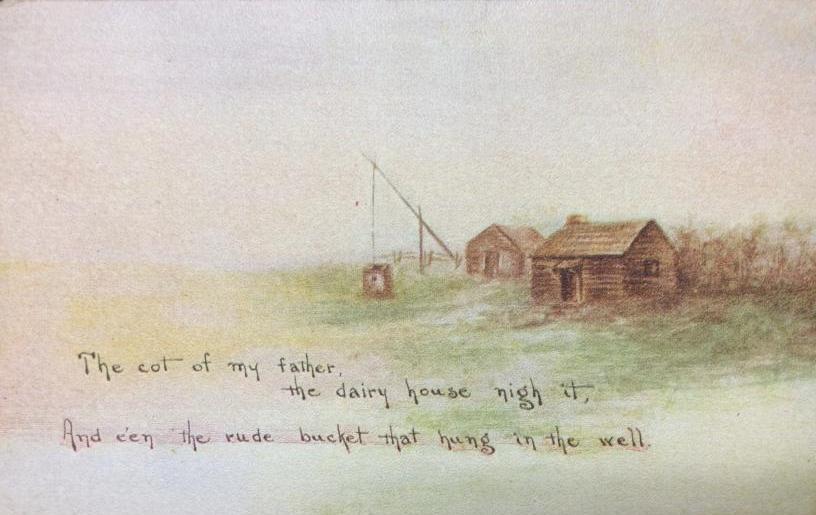 Mary Orton was married a few years after this postcard was sent, on January 30, 1917, to Albert J Suprenant, of Fall River. They were found on the 1920 through 1940 censuses in that city, and at last look they were living at 41 Lafayette Street. They had two children, whom I will leave unnamed, since I didn't find death records for them. Albert died on October 12, 1973, and Mary on August 31, 1974. They are both buried in Oak Grove Cemetery, Fall River, as are much of Mary's family, including her parents.

Before we leave New England, lets take a quick look at the Wainwrights, the family that Mary and Florence evidently worked for, and who were going back to Philadelphia for the winter.

Joseph Reeves Wainwright and Laura Lloyd Coates were married in Philadelphia 30 April 1901; it was the second marriage for both.Joseph R Wainwright and Laura L Coates, 30 Apr 1901, in "Pennsylvania Civil Marriages, 1677-1950," at familysearch.org In 1910 they were living at 1635 Spruce Street in Philadelphia.Joseph Wainright household, 1910 Census of Philadelphia, at familysearch.org. Joseph was the founder of Penn Chemical CorporationObituary of Joseph Wainright, Philadelphia Inquirer, July 10, 1917, as found at findagrave. and, more to the point of this article, a member of the West Island Club, Sakonnet."In Search of the West Island Club" in New England Boating. When the Club ceased operations in 1906, Mr Wainwright bought East and West Islands from the club. He died 7 July 1917, in Ardmore, Pennsylvania,Joseph Reeves Wainright page at findagrave.com. and his wife Laura on 2 February 1941, also in Ardmore.Laura L Lloyd Wainwright page at findagrave.

If you really want to get sidetracked, read about the history of West Island at In Search of the West Island Club, at New England Boating, and O’CONNOR aka “East & West Island”, at the Sakonnet Preservation Association. 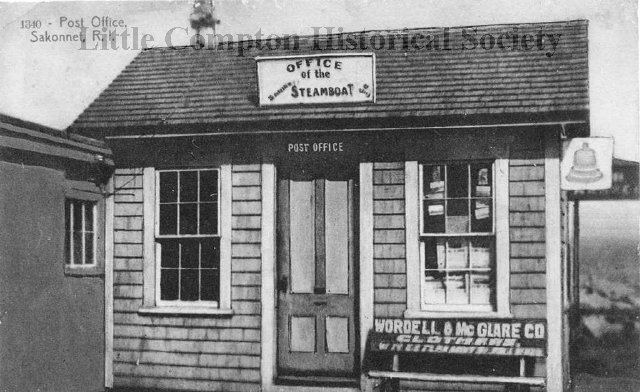 Thanks to the Little Compton Historical Society, I came up with a picture of the post office where Mary Orton mailed her card to her cousin. The staff member told me that it was at Sakonnet Point near the dock, and was probably only open in the summer. The sign over the door indicates that it was also the Office of the Sakonnet Steamboat Company. According to the Historical Society's site, this picture was taken between 1910 and 1920, which would include the summer that we know Mary spent in Sakonnet.

Getting back to our main theme, so far we have established that Mary Orton's father, George Orton, was born about 1844 or 1845 in Shilton, Warwickshire, the son of Edward and Diana (Wesley) Orton. Did he have a brother in Hastings, Nebraska, the father of Lottie Orton? Let's see.

Sources and more information about the Ortons of Fall River can be found here.