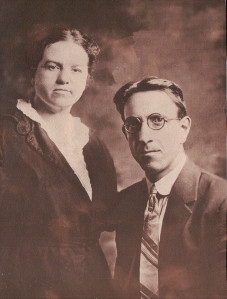 Do you recognize the man in this picture? He may have come into your family's history about 1925, probably in the East Boston or Roxbury, Massachusetts area but possibly in Bangor, Maine. If so, it is likely that you haven't been able to find any record of him before that date. He may have been working as an elevator operator, or for the Boston and Maine Railroad. You may have a family story about a previous marriage, two daughters, a father in Melrose, or a mother in Jamaica Plain.

If this sounds familiar, here is the rest of the story:

William Jerome Page was the third child of Oscar Stover Page and Martha Cowan. He was born May 4, 1883, in Portland, Maine. Oscar was working as a railroad engineer and the family lived there for a brief time. William's two older siblings, Joseph Oscar and Abbie E., were both born in Bangor. About 1885 the family moved to East Boston, and William's two younger brothers Augustus Emery and Frederick (also known as Stover) were both born there.

While in East Boston, William met Margaret Jenkins, born in 1889, the fourth of six children of James Jenkins and Catherine Carrigan. William and Margaret were married in Veazie, Maine, on April 25, 1905. They had returned to Bangor just previously. Their first six children were born in Bangor or Brewer. The family moved back to East Boston by 1919 and then to Roxbury where their last child was born in 1924. At that time William and Margaret were living at 2985 Washington Street, Roxbury.

Shortly before or after the birth of his youngest child, William left his wife and children. Margaret is said to have hired a private investigator to look for him but was not successful. She apparently had him declared legally dead, since in the 1934 Boston City Directory she is listed as a widow. He is said to have kept secretly in touch with his two oldest daughters, but their surviving descendants have no recollection of such correspondence.

William Page has not been found in the 1930 Census nor in the available city directories for Boston, Bangor, Brewer, Melrose, or Malden after 1924. His death is not listed in the records of Maine, Massachusetts, or New Hampshire, online or on microfilm. He is not buried with his wife, parents, siblings or his known children. He is not mentioned in the death notices of his parents or the siblings who died after 1924.

It is likely that William changed his name. Some other surnames in his family are: Cowan, Inman, Carey, and Dudley. Also, the name Stover was used as a given name in the Page family. He may have chosen one of these names to go by.