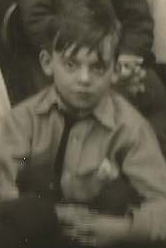 This website includes a picture of the 1922 second grade class at Holy Name Parish on Broadway on the southeast side of Cleveland. My mother was in that class and identified most of the children in the picture. She identified the second young man from our right in the front row as Peter Boland. There was a Peter Bolan living in the area, described below, who is probably him. I don't know if my mother knew it at the time, but her father had boarded with Peter's grandparents shortly after arriving in the United States, and is in their household in 1900.

Peter T Bolan was born in 1914 in Ohio, the son of Peter T Bolan and Elizabeth Sadler. In 1920 they were living at 4063 East 91st and Peter Bolan, Sr., was a scales man for a steel mill. Besides Peter and his parents, there were Peter's sisters Geraldine and Annette, and his younger brother Thomas. They were still at that address in 1922, the year the photograph was taken.1,2

Peter Bolan completed four years of high school and was living at home in 1940. He was living in Euclid when he died on July 5, 1971, and is buried in Calvary Cemetery. He must have married because he is listed as divorced on the death information.3,4,5

Peter's paternal grandfather, Thomas Bolan, was born in Old Monkland, Lanarkshire, Scotland, about 1839, the son of Peter Bolan and Catherine Reddy. Peter and Catherine are said to have been married in Dublin, Ireland, in 1838. See the My McMonagles tree at rootsweb, updated 2011-10-04.

Peter's paternal grandmother, Susan Gibb, was born about 1847 in Bellshill, Lanarkshire, the daughter of George Gibb and Susan McShinnan. It looked to me like the original Scottish spelling of this name is McShenoig. Her father Alexander was from South End, Argyll, Scotland.

I didn't fare as well on the Sadler side of the family, but not for lack of trying. I could only trace the Sadlers back to William H Sadler, born September 29, 1846, somewhere in Canada. William married Anna Heffernan who was born June 28, 1851, somewhere in Pennsylvania, possibly Pittsburgh. Her parents were John Heffernan and Bridget Teefey/Difey/etc. The Heffernans were said to be from County Clare, but I have lost the source for even that bit of hearsay information.

There is more, along with sources, in the Ohio Families Tree on this site.

If you are a relative or descendant of Peter Bolan you are welcome to download the class picture and pass it on. If you would like a larger image, with possibly better resolution, contact me.