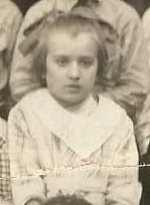 This website includes a picture of the 1922 second grade class at Holy Name Parish on Broadway on the southeast side of Cleveland. My mother was in that class and identified most of the children in the picture. She identified the second young woman from our right in the second row as Rosanna McNamee. There was a Rose/Rosina McNamee living in the area, described below, who is probably her.

Rose or Rosina McNamee was born about 1914 in Cleveland, the daughter of James McNamee and Anna Famera. 1 In 1920 the family was living on Sladden Avenue in Garfield Heights. Besides Rose and her parents, there were her two brothers James and Charles. In 1922 they were still on Sladden Ave; Rose's father was working as an auto mechanic.2, 3

The Parsons Family Tree family tree at ancestry.com includes Rose McNamee and her family. The tree says that Rose's McNamee grandparents were born in Lanarkshire, Scotland.

If you are a relative or descendant of Rose McNamee you are welcome to download the class picture and pass it on.