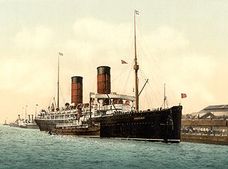 This is a reworking of an older article. What's new:

Rose Sloan and Richard Farrell were married in the Roman Catholic Chapel of Our Lady in Rostrevor on January 2, 1896. Rose said she was of full age, living in Ballincurry, the daughter of Daniel Sloan, a laborer, who had died.

So far I haven't found a birth or baptism record for Rose or for any child of Daniel Sloan from 1868 to 1874, and whoever provided the information for Rose's death record did not know her mother's name.

Rose's father is likely the Daniel Sloan on the Valuation Revision Books of Ballincurry from 1865 to 1892. He is renting a small parcel, consisting only of a house and garden, from Hugh Brennan. There were no out-buildings. Daniel died June 22, 1889, in Ballincurry at the age of 75. Rose was present at his death and provided the information for his death record.

In 1892 the parcel passed into the hands of Daniel's representatives. In 1907 the parcel went from Daniel Sloan's representatives to Rose Brennan and there is a note in the margin that says "House not quite down as reported"–if I read it right. Rose's mother might not have stayed in Ballincurry after her husband died. I don't see her there in the 1901 census. She isn't Rose Brennan, since that woman had a 25 year old son named Brennan in her 1901 household.

On the other hand, Rose's mother may have died before her father, and she might have been named Rose also, who knows. But she is not:

I haven't yet looked for the death of a female Sloan not named Rose during those years.

Richard Farrell's marriage information said he was living in Ballinadoalty at the time and was the son of William Farrell, a butcher. His birth record shows that Richard was born April 19, 1875, in Benagh Townland, Kilkeel, to William Farrell, a butcher, and Margaret George. Whether Upper Benagh or Lower could be determined by looking at the Valuation Revision Books again.

Richard and Rose (Sloan) Farrell were on the SS Campania when it arrived June 9, 1900, in New York from Liverpool. Between them they had $50, but were not holding tickets to their final destination, which they said was Albany, New York. They were travelling with James O'Rourke, James Murney, and Matthew Sloan. All five of them said that their last residence in Ireland was Newry. However the three young men with the Farrells were from Killowen, Rose said she was living in Ballincurry when she was married, and Richard said he was of Ballinadoalty at the time of his marriage.

Rose was 28 and Richard was 24 when they emigrated. They said they were going to the home of Mary Pearl, Richard's sister in law, at 115 Jefferson Street, Albany. There was a Mary Pearl in Albany who had been born in Ireland about 1830. She was the widow of John Pearl, and had sons Thomas (born in New York in July 1852) and John (born in Ohio about 1860). She was living at 8 Jefferson, Albany, in 1898 and 1899, but she died on March 27, 1899. I have not determined her maiden name or county of origin in Ireland. I think the Farrells actually went straight through to Cleveland with the others.

What we do know is that in the 1902 Cleveland City Directory Richard Farrell was listed at 2059 Cannon, which corresponds to about 9200 Cannon in the current numbering. In fact he might be in the 1901 Directory as the Richard Farrell at about 8000 Burke, according to the modern numbering. Both of these streets are in the Newburgh section of Cleveland. The city directories reflect the previous year's information, so that could put the Farrells in Cleveland in 1900.

Having arrived in Newburgh, the Farrells didn't go far. They were at various addresses on Cannon until at least 1935. Richard worked in a "wire mill" and a "steel mill", which sounds a lot like American Steel and Wire. In 1910 Rose said that she had been married 14 years and had given birth to one child, but it was no longer living. I didn't find a record of this child's birth in Cleveland. Their census records say that Richard and Rose had no other children.

As for births in Ireland, the civil records are on line, and I have also eliminated the following children:

Rose died at home, at 9220 Cannon Ave, Cleveland, on Nov 24, 1935, of complications from chronic myocarditis, which had affected her for six months. Richard died on July 16, 1937, at 4055 East 91st, of the same condition. He was working at Allyne-Ryan Foundry when he died. They were both buried in Calvary Cemetery from Donlon's Funeral Home on Miles Ave.

Photo of the SS Campania is from Wikipedia.