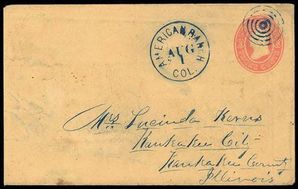 Lucinda (Bloom) Kerns was born about 1825 in Pennsylvania and married George W. Kerns on January 31, 1847 in Will County, Illinois. They are on the 1850 Census of Bourbonnais in Will County, with two children. George was working as a mail carrier and Lucinda's sister Harriet was living with them. In 1860 they are living in Kankakee, Rockville County, Illinois, and George is a farmer.

In 1870 Lucinda is alone in Kankakee with three daughters. A biography of her son-in-law, Samuel P Nesbitt has this to say:

Mr Nesbitt [was married to] ... Miss Alice Kerns, a native of Kankakee and the daughter of George and Lucinda (Bloom) Kerns. ... [her father] died in the West, on the Comstock ranch, while on a prospecting tour of that region. He was about sixty years of age.See: Historical Encyclopedia of Illinois, edited by Newton Bateman and Paul Selby, and History of Kankakee County, edited by William F Kenaga and George R Letourneau, Volume II, (Chicago: Middle-West Publishing Company, Publishers, 1906), p 1087, 1088. At Google Books.

I think the biographer, or his source of information, may have the wrong name for the ranch, since I didn't find any mention of a Comstock Ranch in Colorado. Someone may have been thinking of the Comstock lode in California. But at any rate, it looks like George went west to look for a better life for his family. Did he intend to return to Illinois, or was he planning on having his family join him in Colorado?

The Moore Family Tree at ancestry.com, adds the exact dates of January 21, 1872 for George's death and January 15, 1877, for Lucinda's, but without a source. In addition, that tree says that Lucinda was born March 3, 1824 in Burlington, Bradford County, Pennsylvania, and George was born December 11, 1825. Again without sources.

Findagrave.com has a photo of a headstone for George and Lucina (Bloom) Kerns in Blooms Grove Cemetery, Manteno, Kankakee County, Illinois. The headstone says "Kerns/Lucinda Bloom 1824-1877/George W/1825 - 1872." There was no inscription saying otherwise, so possibly George is buried there with his wife.

This was one of the first postal covers that I researched, but I took another look at it recently. The quote from the biography of George and Lucinda's son-in-law, and the headstone image at findagrave were new, providing a little closure on George's outcome.

Image used by permission of  PHILGEN: Philatelic Genealogy. To see it there click on Search Database in the left column, then search for Kerns. The image originally appeared in Schuyler Rumsey Philatelic Auctions, Sale 28, Lot 36.