John and Henry O'Rourke—Kilkeel to Cleveland 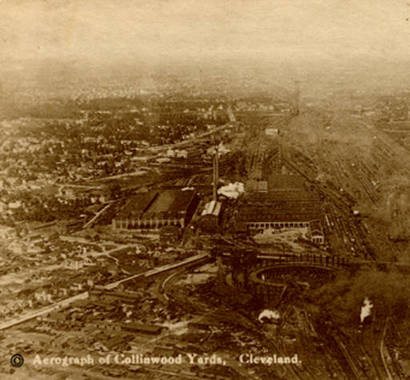 Aerograph of Collinwood Yards, ClevelandThe aerial view of the Collinwood Railroad yards comes from the Michael Schwartz Library, Cleveland State University and is found at The Cleveland Memory Project.

While looking for the John O'Rourke who came with my grandfather from Killowen to Cleveland (see William O'Rourke, Killowen to Cleveland), I found another John O'Rourke in Cleveland instead. This man and his brother Henry were from Kilkeel. The evidence is a bit circumstantial, but I think it is solid enough to put the family together. I'll sketch it out here—the details are in the Trees > Ohio Families section of this site.

John was baptized December 3, 1846, in Kilkeel Catholic Parish, the son of John Rourke and Catherine Rourke (that was her maiden name.) His death record in Cleveland said he was born December 6 of that year, but 1) people didn't always know their exact birth date, 2) sons don't always remember their deceased parents' information, and 3) I don't think all priests remember the exact date they baptized a child. His death record did say that his father's name was John, but didn't give his mother's name.

John's brother Henry was baptized August 27, 1848, in Kilkeel. His death record said he was born August 25, 1849, but, on the plus side, listed both parents: John O'Rourke and Catherine O'Rourke. In fact, there was an "ok" next to Catherine's name, as if to say "yes that is her maiden name."

Also tying them to Kilkeel is the fact that John married a woman named Anna Rodgers, and Henry a woman named Selina (Sloan) Sands.

If Anna was from Kilkeel and if her baptism was recorded, then she might be either the daughter of James Rogers and Anne Brennan, baptized May 5, 1850, or the daughter of Pat Rogers and Ellen Carroll [or Farrell], baptized July 21, 1854. Her American records would favor the earlier of the two.

Selina Sloan, according to her death record, was born November 12, 1849, the daughter of Henry Sloane and Catherine Colgan. This couple lived in Ballymadeerfy Townland, Kilkeel, and have four of their children on the baptismal records—but not Selina. Selina was first married to Thomas Sands, who came back to Ireland for the marriage January 11, 1870. Thomas took Selina back to Cleveland in March, and their only child, Mary, was born there in November. Sadly, Thomas died the day after their first anniversary, leaving Selina a widow and a mother at the age of 21. She remarried Henry by early 1873.

On their later censuses, both John and Henry said that they had arrived in America in 1871. They both settled in the Collinwood section of Cleveland, and both worked for the railroad. Although neither of their death notices named the other, the naming patterns of their sons match closely enough to link them as brothers as well.

John died in December 1929 and Henry in the following April. Both are buried in Calvary Cemetery, Cleveland. There were other children in their birth family, but I wasn't able to find any of them in Cleveland. They may have gone elsewhere, but elsewhere is a pretty big place to look.

Updated June 2, 2019: The parents of these two men were living in Corcreaghan Townland, Kilkeel, when their sister Catherine was baptized in 1857.