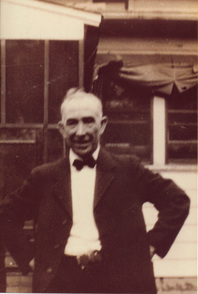 In the merry month of June 1899, William Rourke salutes his father dear, kisses his darling mother, and heads on down the rocky road to America, never to return. Soon after leaving his home in Ballintur Killowen, County Down—and probably on the crossing to Liverpool—William re-instates the O' in front of the Anglicized version of his name. On the manifest of the HMS Majestic, which was "filled out not at Ellis Island but at the immigrants' ports of departure" 1, he gives his name as William O'Rourke and his home as Ballinatore. He had thirty dollars in his pocket. The story is that he sold the family's cow to pay for his trip.

William was accompanied by a John O'Rourke age 37, single, and a naturalized U.S. citizen, also from Ballinatore. John had lived in Cleveland for six years, and was headed to his brother's house on Detroit St.  John O'Rourke must have been a relative of William but he is not William's brother John, who stayed in Ireland.

Edited March 31, 2019. John O'Rourke was William's first cousin, christened January 22, 1860, the son of Edward Rourke and Rose Fagan, and a fellow a resident of Ballintur. See his article here: John O'Rourke Who Arrived in 1899.

The ship sailed on June 14, 1899 and they arrived in New York thirteen days later. Presumably they took the train to Cleveland. Once there, William may or may not have headed to the home of "J. O'Rourke". In 1900 William was boarding with Thomas and Susan Boland at 1626 Harvard St. This address is now approximately at 86th and Harvard. (The streets in Cleveland were renamed and reorganized in 1905.)

Passenger manifest of the HMS Majestic, from Liverpool June 14, 1899, left

Passenger manifest of the HMS Majestic, from Liverpool June 14, 1899, right

William later lived with his son and daughter-in-law in the E. 131st Street area as well. When he went into a nursing home it was on Granger Road. He seems to have brought with him from Ireland the Irishman's resistance to being transplanted from his homeland. You might move me once, but never again.

Something else that William brought from Ireland, I suspect, was reflected in his tendency to spend most of his free time in the cellar. Even while he was raising and providing for a family, he would go down to the basement after dinner and listen to his radio until it was time for bed. He managed to be both a recluse and the father of eight children. 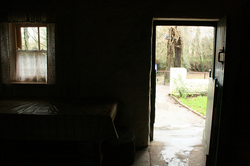 inside of an Irish cottage

Forty years after his death, I came across the following passage in The Great Hunger, by Cecil Woodham-Smith. Read it and see if it doesn't explain why William, who was born in a two-room stone dwelling with a thatched roof and two windows, felt more comfortable in the basement:

"Cellar dwellings, whether in English towns or the cities of North America, were almost invariably occupied by the Irish. Poverty, ignorance and bewilderment brought them there, but it must not be forgotten that cellar dwellings resembled the dark, mud-floored cabins in which over half the population of Ireland had been accustomed to live."

1: Ellis Island, Where Did Passenger Information Come From?