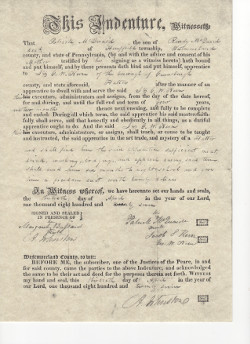 The transcription was done from the digital image of the original document which I received from a descendant of George W. Kern. It had been passed down through the Kopelin family to Mildred Wagle, who gave it to the father of the person I received it from. The document is posted and transcribed with the permission of the owner.

The original document was a printed "boilerplate" legal form, with spaces for the names of the individuals involved and the details of the apprenticeship.

That Patrick McQuaid, the son of Rudy McQuaid dec'd, of Hempfield township, Westmoreland county, and state of Pennsylvania, (by and with the advice and consent of his Mother testified by her signing as a witness hereto) hath bound and put himself, and by these presents doth bind and put himself, apprentice to J & G.W. Kern of the borrough of Greensburgh county, and state aforesaid, Hatters after the manner of an apprentice to dwell with and serve the said J & G.W. Kern their executors, administrators and assigns, from the day of the date hereof, for and during, and until the full end and term of four years and two months thence next ensuing, and fully to be complete and ended: During all which term, the said apprentice his said master faithfully shall serve, and that honestly and obediently in all things, as a dutiful apprentice ought to do: And the said J & G.W. Kern their executors, administrators, or assigns, shall teach, or cause to be taught and instructed, the said apprentice in the art trade, and mystery of a Hatter and shall find him the said apprentice sufficient meat, drink, washing, lodgings, and apparel during said term, shall send him six months to night school and give him a freedom suit worth twenty dollars.

In Witness whereof, we have hereunto set our hands and seals, the thirtieth day of April in the year of our Lord, one thousand eight hundred and twenty seven.

SIGNED AND SEALED
IN PRESENCE OF

BEFORE ME, the subscriber, one of the Justices of the Peace, in and for said county, came the parties to the above Indenture, and acknowledged the same to be their act and deed for the purposes therein set forth. WITNESS my hand and seal, this thirtieth day of April in the year of our Lord one thousand eight hundred and twenty seven.